On the way back to Pakse, we stopped at one more waterfall for good measure I guess. Tat Fan was 120 metres high, but we could only see it from a distance. A curly haired guy in the parking lot told us he was only a little disappointed because he couldn't feel "the power" from so far away. I ate a bunch of bananas for breakfast, watching a busload of tourists take photos. 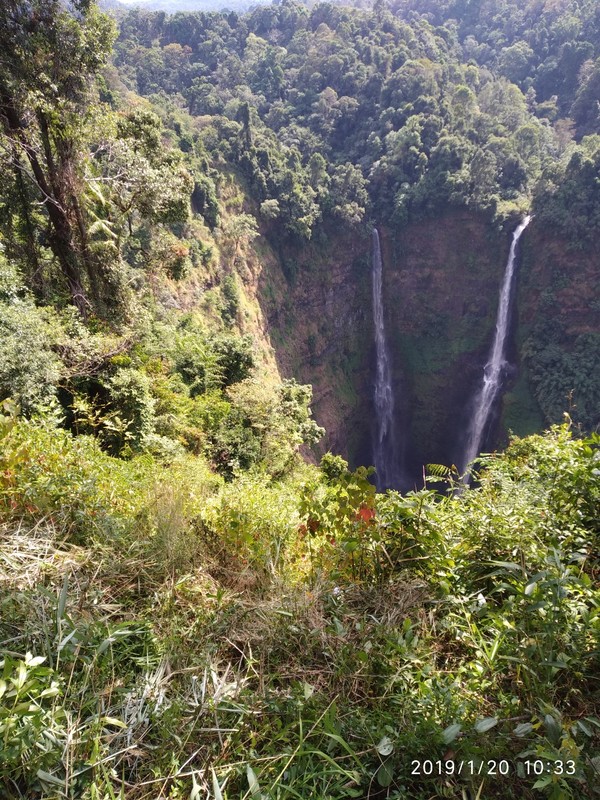 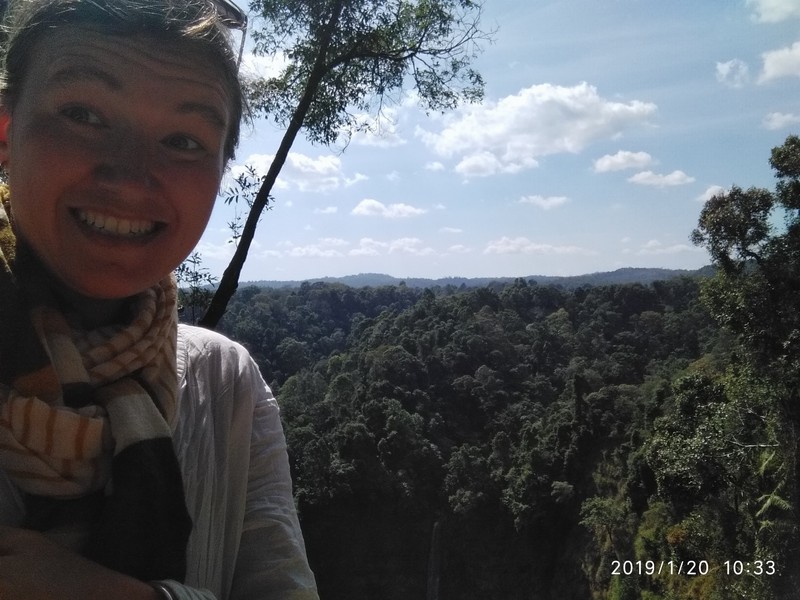 On the last leg of the trip, I'm not sure what I said, but Gustav wasn't taking it anymore. He asked me if we should take the ring road but there was no ring road on my map, so I said "No, turn right. I would turn right."

"Stop talking bullshit," and he stopped on the side of the road to yell at me again. I started crying and shaking and he told me to "behave myself." But then he sped off like a maniac, reminding me of Keith having a tantrum and speeding around in his V8 engine. He always made sure I knew it was a V8 engine.

Anyway, I tried my best to figure out what Gustav and I owed each other, but it was probably not right. Gustav didn't ask me for much money so I just thrust it at him and stormed off, cursing myself because I had no idea where I put my phone. So, I had to go through all my pockets and throw everything down on the sidewalk before I could take off.

I got a dorm at the same hostel as before and called Jeremy and my mom to tell them I was OK. I was lucky to have the whole three bed dorm to myself. I had noodle soup for dinner in Talat Dao market, which was fun. 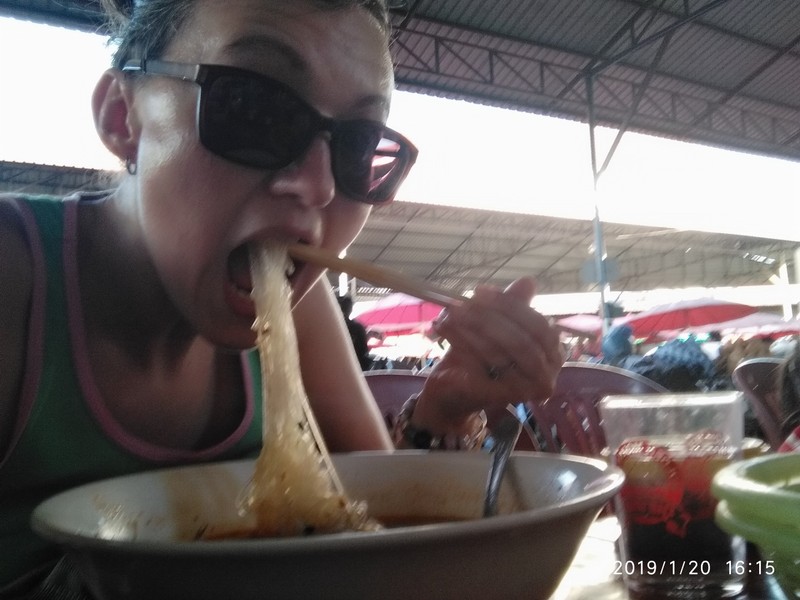 Then, I went over the long bridge to watch the sunset from the big golden Buddha on the hill. 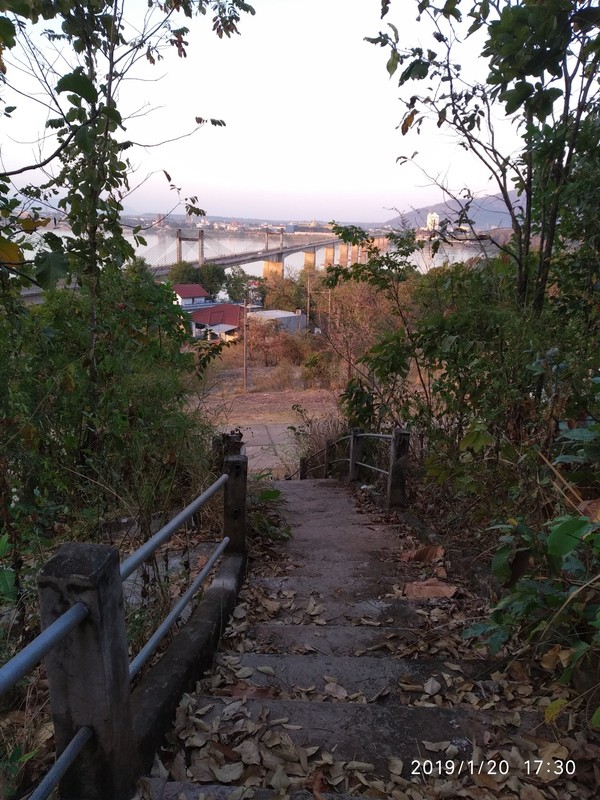 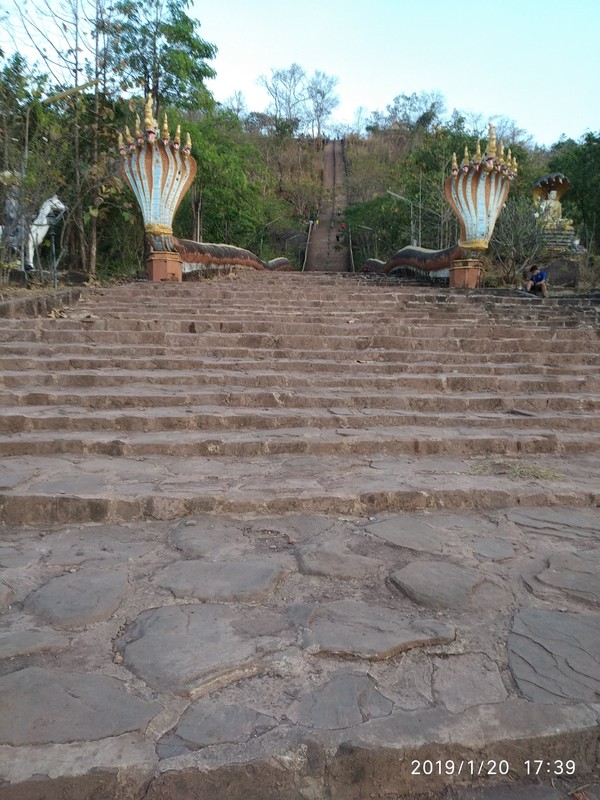 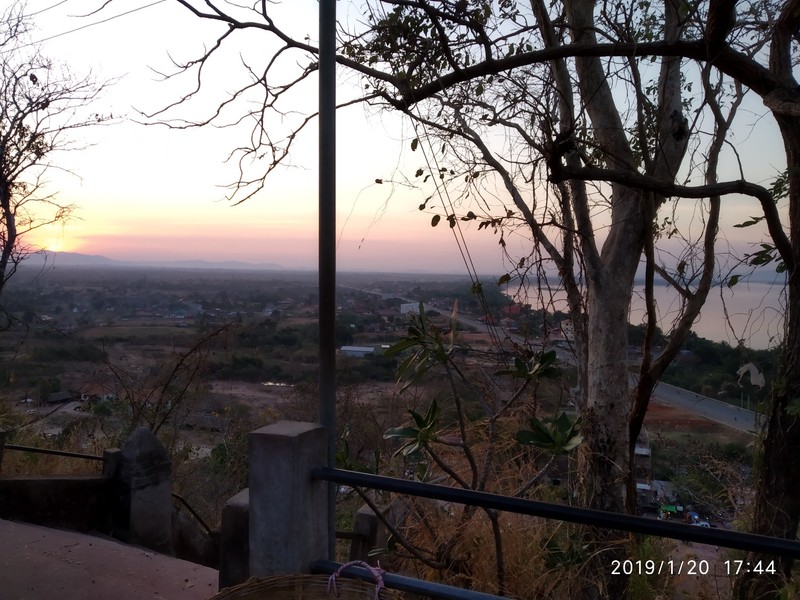 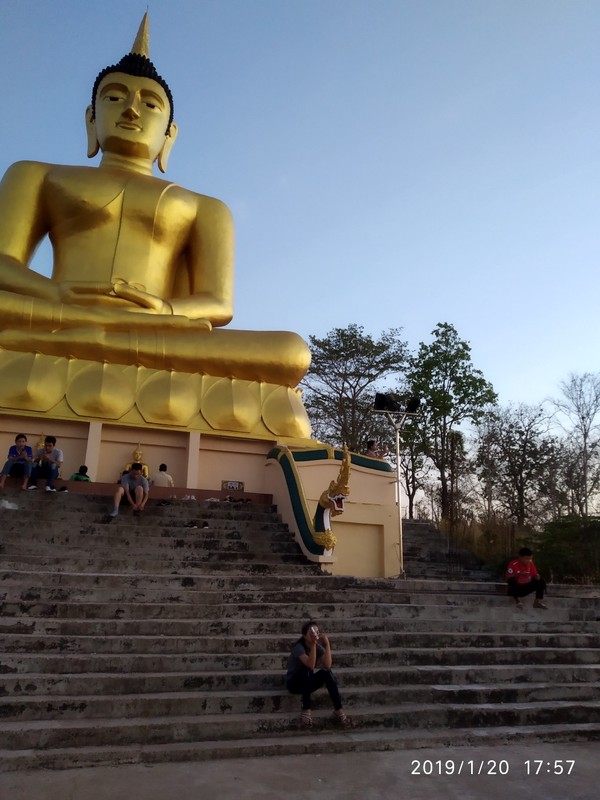 A little girl gave me some incense to light and walked me down the stairs. It was getting dark and I walked all the way home. At one point, I saw some sketchy looking guys on the bridge. I crossed over to the other side to avoid them. I had to climb over some traffic barriers to do so. If I was a man do you think I'd even contemplate doing something like that? Nope, I'd just shove them to the side and walk right in between them, scowling and daring them to come at me, bro.

Some little girls were selling coconuts on the street, so I bought one and sipped on the juice while watching a little carnival. I passed out dead to the world after downing a lot of lovely cool water from the hotel lobby.

I slept well but didn't get out into the world until 9:30 a.m. I went to see another temple with murals of Buddha's life. There was some sort of procession, where they threw rice and candy in the air as they chanted and marched around the main building. The little beggar children looked very happy with the candy. 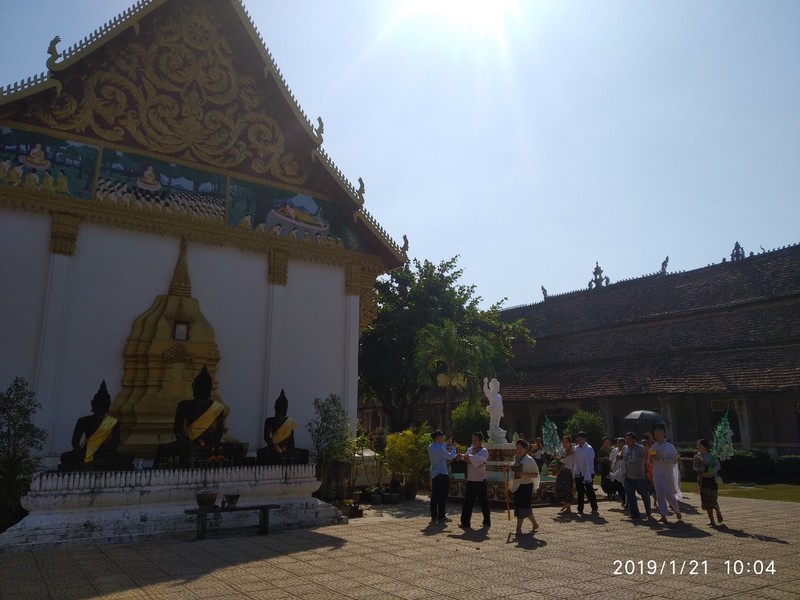 The next stop was the Catholic church, which had amusing murals of Jesus visiting local villagers and baptizing people in the nearby waterfalls. I felt like I had to spend a little time saying thank you to God for the luxury of travel, for still being alive and for not being sick etc. etc. etc. Before I knew it I was silently weeping by myself in this empty little church in the wilds of Laos, as many similarly confused western colonizers had done in this exact same spot in the past, I'm sure. 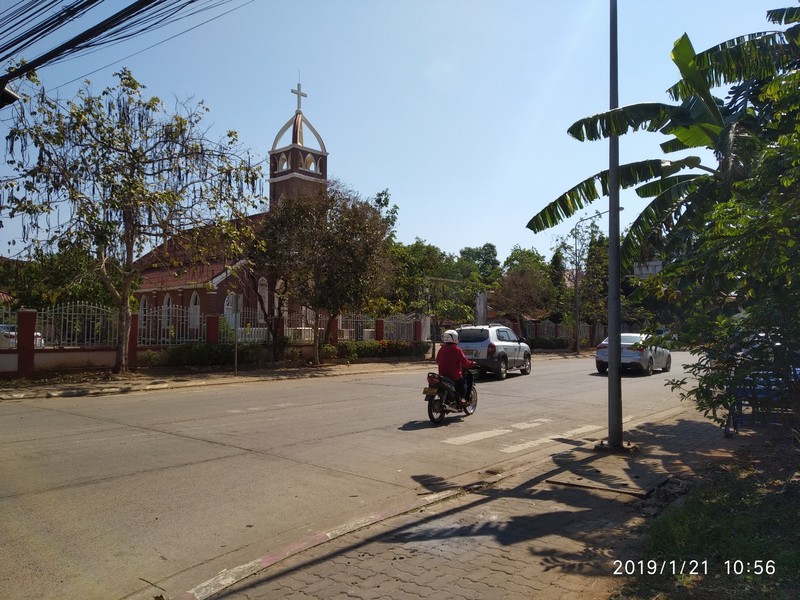 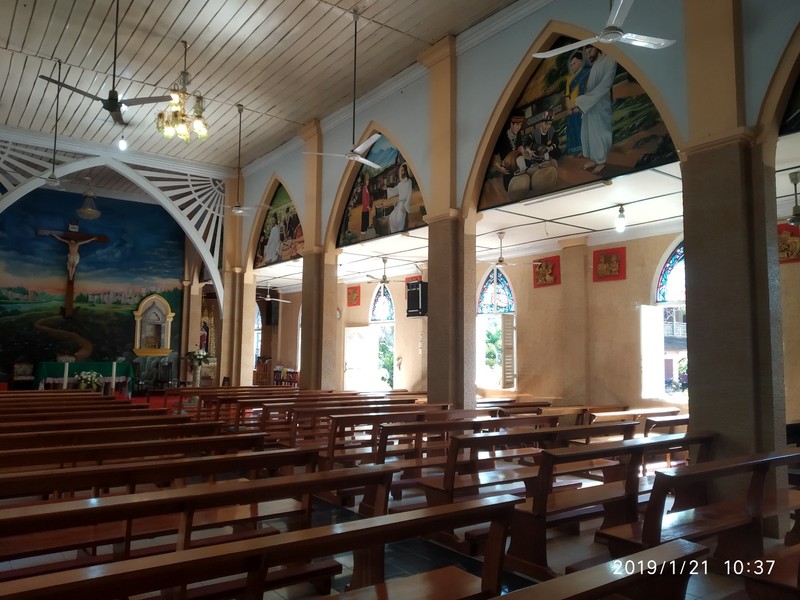 The people at the church let me use the washroom and I had some amazing sausage with a papaya salad for lunch before heading back home. 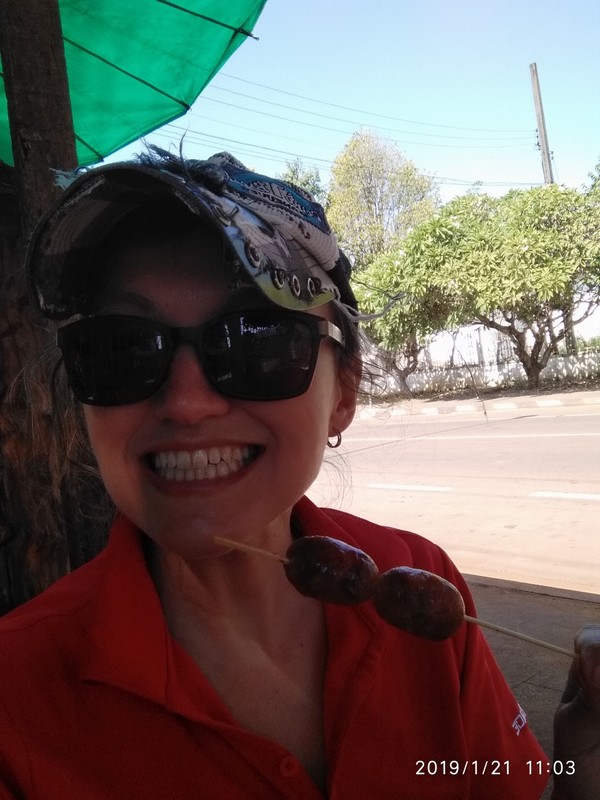 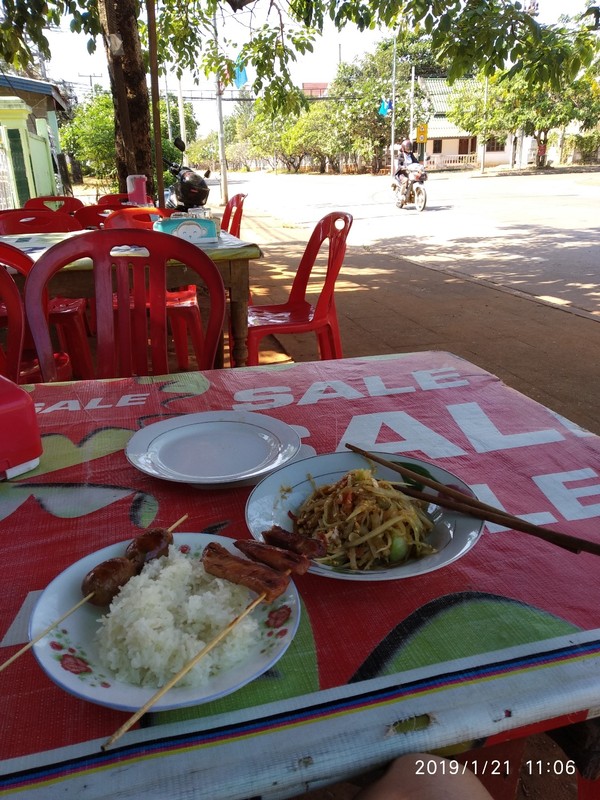 On my way there, I met Liz, who had just arived from five months of backpacking in Africa. She seemed lost with her huge pack on her back, so I brought her to my hostel and we went to the small museum down the street.

There were some interesting statues. For example, a man was hugging a woman from behind in a statue that was a thousand years old or more. Upstairs, there was a small collection of unexploded ordinance, including one attached to a parachute. So, that parachute was 50 or 60 years old. And there it was baking and disintegrating on the windowsill in the sun. Crazy. 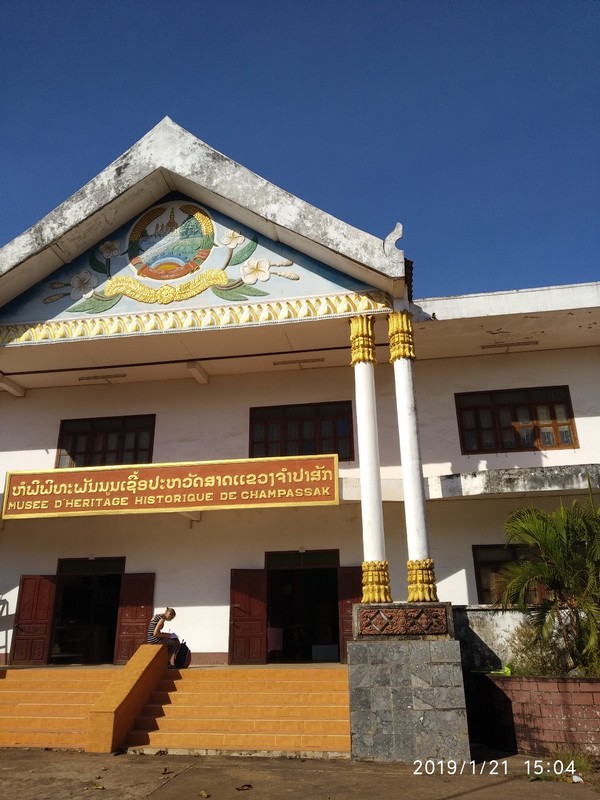 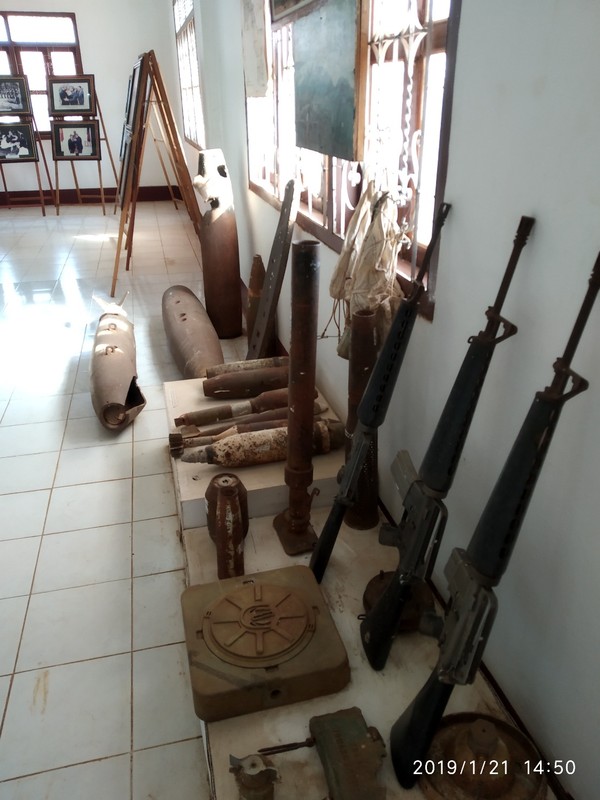 Liz needed to mail something home, so we made it just in time to the post office for that. Then, we had a sunset beer/iced milk tea on the river, obstructed by a strange tarp. I ordered some nice meatballs and a banana salad, but it was really bad. The bananas were soooo green and I couldn't eat them, but at least I tried it once in my life. The wind started picking up, so we headed back home. I bought my ticket to Don Khon, leaving in the morning, so I said goodbye to Liz, hoping to see her again on one of the islands where I'd be chilling out for the next week or so.