We stayed in the room as long as possible and then walked back to the train station. We stopped at the flower market first. 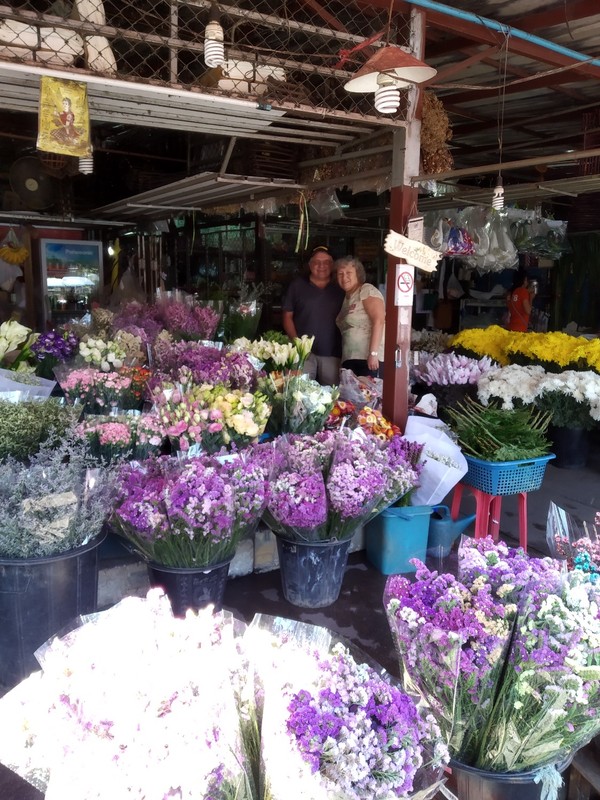 And then we stopped at another regular market and had a bunch of stuff for lunch. I had a nice crepe with some peanut mixture inside of it and something like a red bean samosa with Thai iced tea. Mom cried because her parents had a hard life just like these people in the market probably also did. I figured it was about time for her Asian culture shock breakdown to begin and there it was. 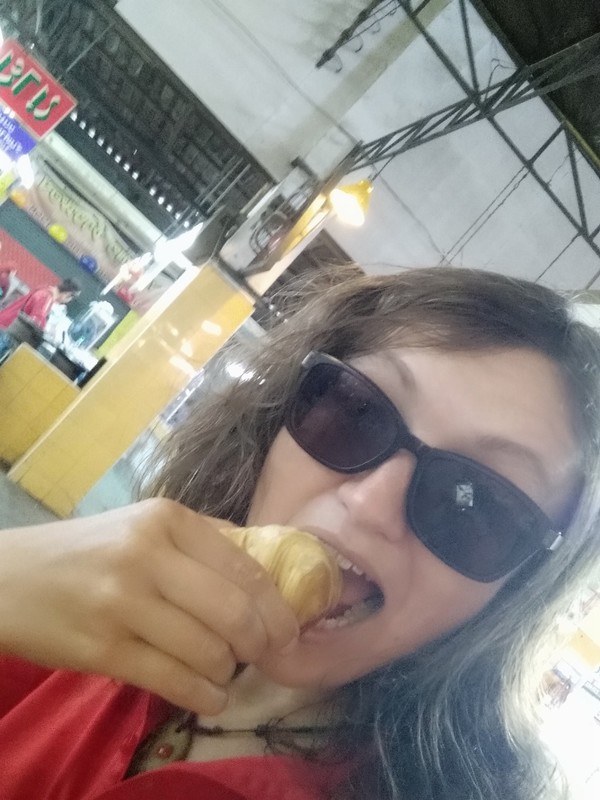 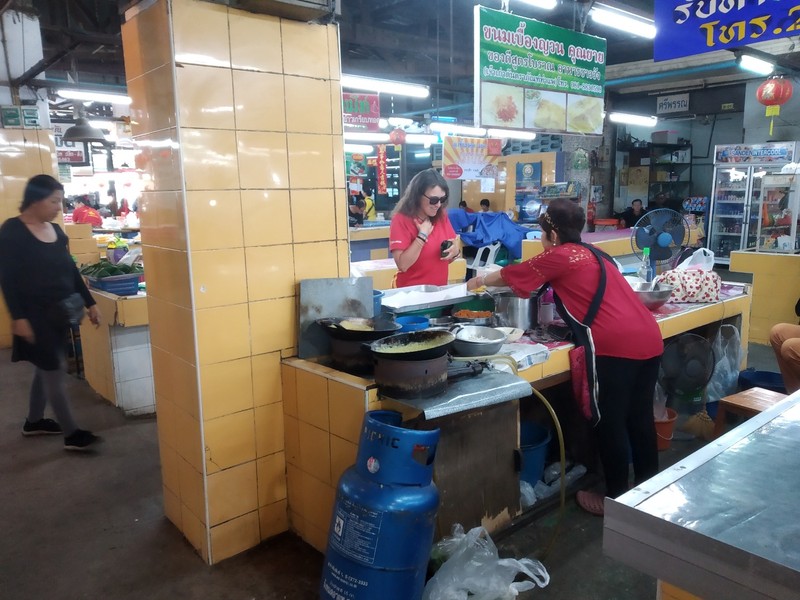 We got to the train station early, but just in time to see a platoon of women soldiers waiting for their train. They seemed happier than another platoon of male soldiers I saw later in the trip. When we got on the train, some rude French people stole dad's seat and even though we had a ticket, they wouldn't move or look at our ticket until their tour guide told them they were in the wrong seats. Ugh.

We met a nice Chinese guy named Quinn who had been doing the work/travel thing in New Zealand for the past couple years.

February 5, 2019
After freezing on the upper bunk again overnight, he followed us to our hostel and managed to convince the front desk guy to let him use the wifi in the lobby until his flight to Vietnam left in 12 hours. Weird. However, we were not tired so we went to see the temples and things in the main tourist area of Bangkok.

It was blazingly hot and miserable. I had already been to the main sites 11 years ago, so I just waited at the exits until my parents were done. We took the water taxi to the various spots. They are all concentrated in a relatively small area of the city. 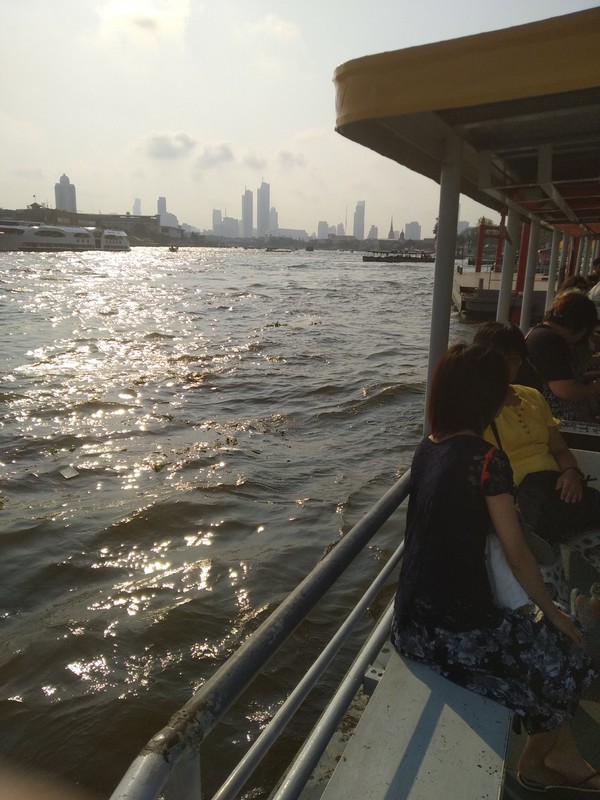 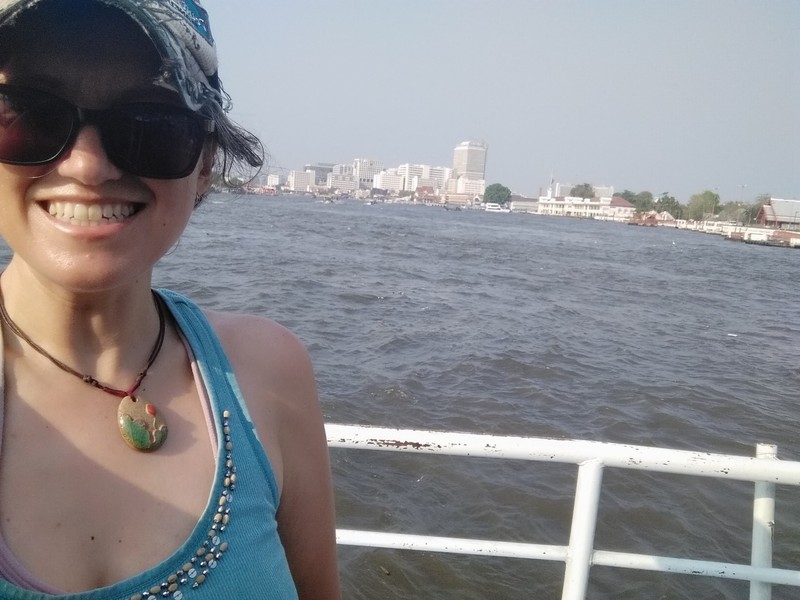 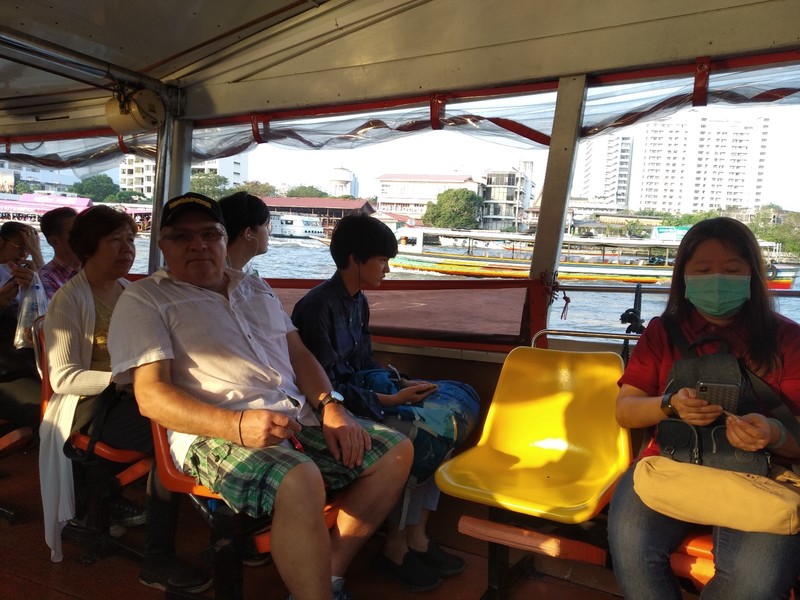 It was nice at Wat Pho, because there was a little park with a working water fountain and a nice pond to stroll around. I sat there with my journal for a while and wondered what it would be like to be a tour guide, sitting here and waiting for my customers to stroll around glittery temples every day, meanwhile making pennies an hour. 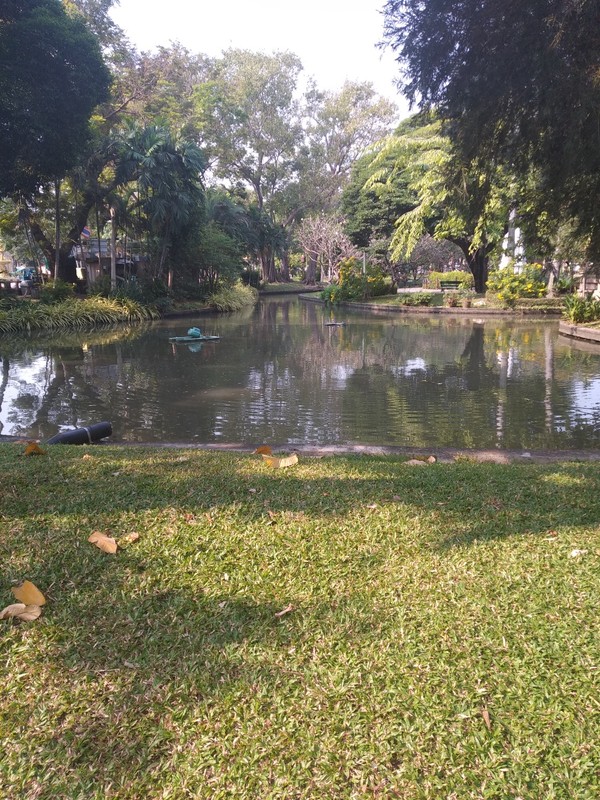 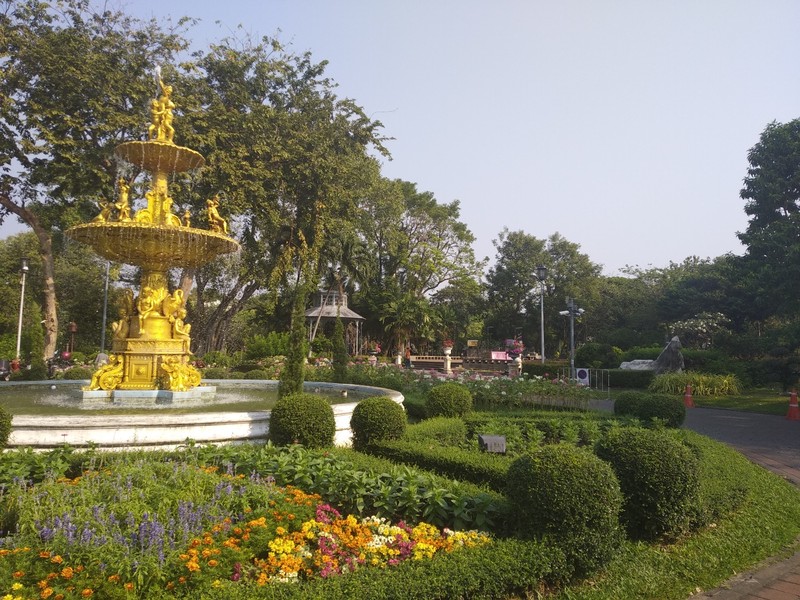 The Royal Palace was crazy busy and by the time we found the entrance, mom and dad realized they couldn't get in. Dad didn't have full pants on and mom wasn't allowed to use her shawl to cover her shoulders. The price was a little steep also, so we just went back home and it was only 2 p.m. when we got there. It's really great to get such an early start to the day. 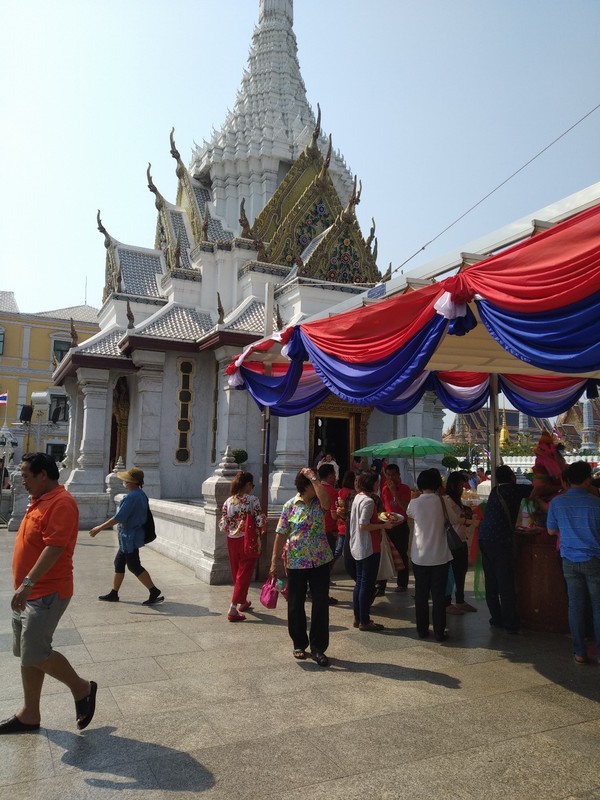 It was perfect timing to check back into Loftel Station hostel. I also called Bo.Lan restaurant to try and get a table. I had booked one earlier for Jan. 30, but my mom made me cancel it so we could go to the flower festival. They told me they were booked up until March 5, but a few minutes after I got off the phone, I received an email saying they had a cancellation. I was not really in the mood for it because the whole day had been kind of confusing and annoying to me, especially the water taxi system of transportation. It was overloaded and even more confusing than the ticket booth for the Royal Palace. So I was grumpy even after downing an entire strawberry slurpee on the walk back home. However, I knew this would probably be our only chance to have a Michelin star meal anywhere in Thailand, let alone Asia, so I tried to make myself more optimistic, but this was in vain. The subway system was overloaded that day as well. It took 20 minutes just to buy our tokens. The trains weren't even as full as I've seen them in Beijing. There just weren't enough token machines. Unacceptable. So the grumpy came back.

Now I want to explain Bo.Lan. We had already watched an episode of Chef's Table on Netflix all about this place. It seemed like the owners put a lot of effort into their dishes and ingredients. Even the sugar was hand made. So, OK, sounds good to me. I'm not sure what I was expecting, but the whole thing came off as extremely overhyped. If I had been alone I would've turned right around as soon as I saw the 4.50 dollar charge for filtered water. What. You sell your restaurant as organic and sustainable etc. etc. but then punish people for drinking unbottled water? I went in against all my instincts and stayed. I had brought my parents all the way here, so we couldn't back out now. They were so excited and it would be so wrong to try and get them to follow my stupid principles. Gut feelings though, aren't baseless.

Anyway, we went into the kitchen to try a beautiful mangosteen and some of that handmade sugar with toasted coconut and rice. We met Dylan, the chef on the TV show too. That was a little weird. I'd rather not. Something felt like he was Mickey Mouse at a meet and greet. I'm not complaining about this place, it WAS really really delicious and awesome. Everything was well prepared and extremely fresh with top quality ingredients for sure. You can definitely taste the care and work they put into their meals. I just didn't get the feeling that the meal was a piece of art as it usually is at these places, and therefore not worth the high price tag. I felt that the dishes were not really planned to fit together. I was expected to put everything together myself. The meal was served family style and they put a bunch of food in front of us but I didn't know what it was. That's what I pay the chef for, darling. I want the chef to put together unfamiliar flavours on my plate for me because he or she is the expert, not me. I felt like the tastes were just jumbled up in my mouth together like a bag of miscellaneous leftovers some roommate from another planet left in the fridge. That roommate told me I could have it, but didn't explain what it was, where she got it or even with what utensil I should eat it with. The servers made a feeble attempt at explanations, but when they brought it all out Asian family style, it just became a big mess.

I have a lot of experience with Asian food, and I know this is the traditional way to eat in this part of the world, but when I spend more than 150 dollars per person, I want the chef to plan out a specific taste experience. I don't want to be the one responsible for creating the tastes myself. Cooking really is art and I want to experience someone's art that they have crafted over years of training and dedication to the craft. I don't want a jumble of stuff I happen to put on my inexperienced plate.

I think the way they present the meal, although it is in the traditional way, really hides the talent of the chefs. All the work they put into the meal is negated by an inexperienced person such as myself plating it out on my own. In other words, even though a restaurant can charge 150 dollars doesn't mean they should. I would happily pay this price for a nicely plated meal but in family style, I just don't think it's worth it.

On top of this, the air conditioning was on so high that it was dripping on my mom. So much for "sustainability" AND I could not for the life of me turn on the sink in the bathroom because the tap was shaped LIKE A SQUIRREL. ALSO, the cheap looking art on the wall, a woodburnt style portrait of a midriff baring Thai woman put another cheesy element into the mix. THEN at the end of the meal we were brought back out into the lobby again for a small dessert. They put some perfectly good peanut brittle under a glass dome full of temple incense??? I mean come on, that's lame. The peanut brittle just tasted burnt and inedible after that. Blech. 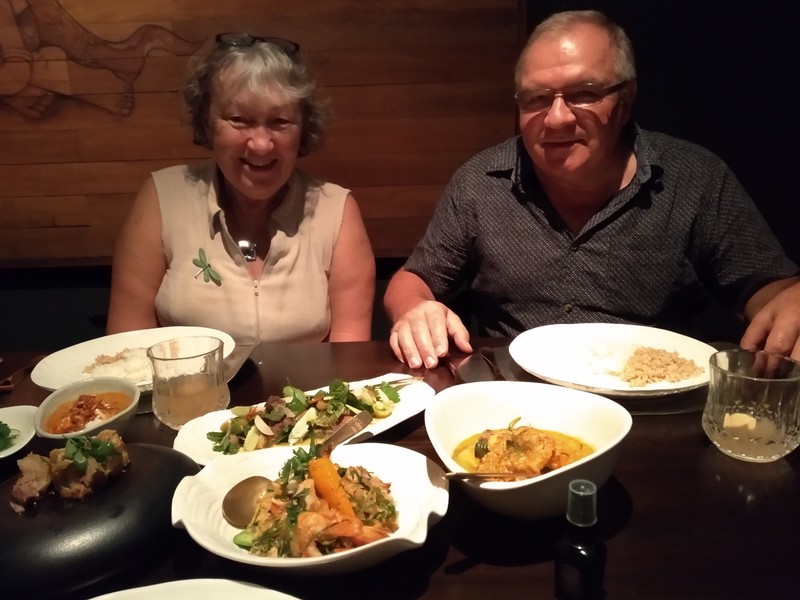 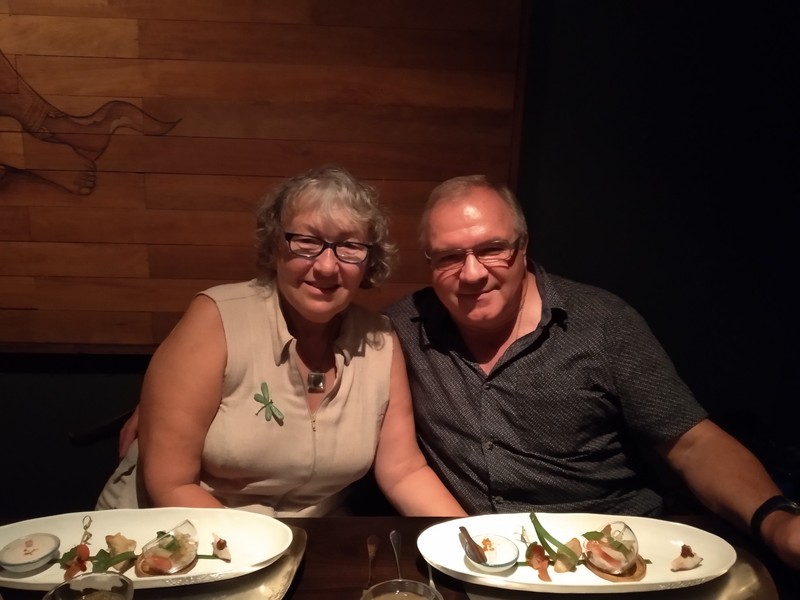 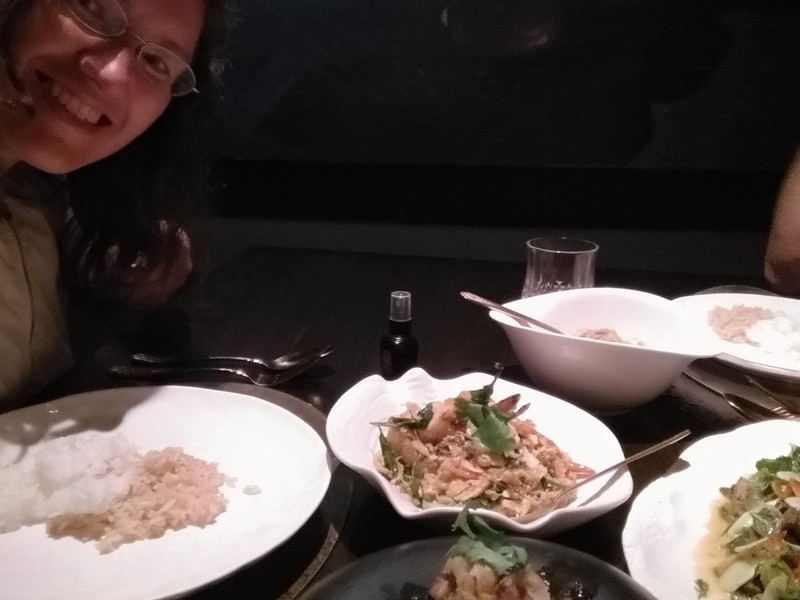