Liz and I had a nice Chinese breakfast of rice and garlic pork. The milk tea was especially great with steamed milk piled high on top. I saw her off at the sky train station nearby. 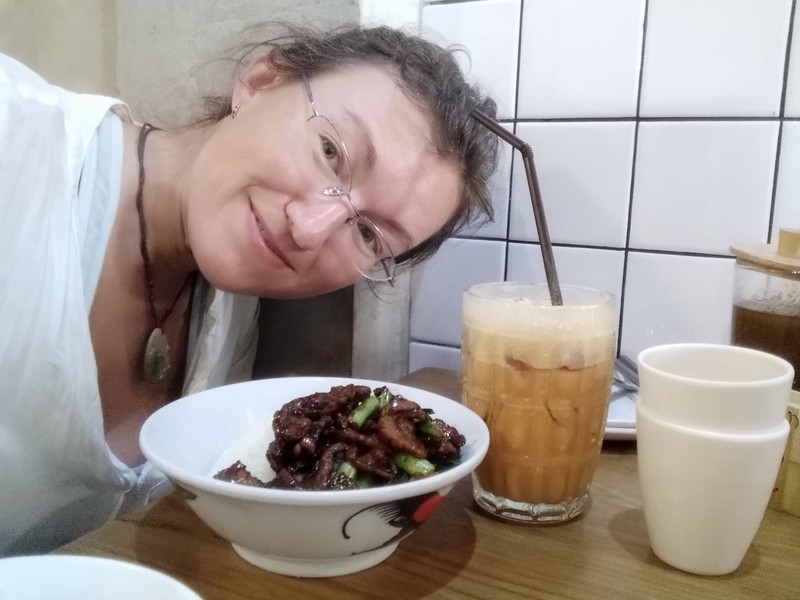 Meanwhile, I went back to nap until checkout time. I messaged Pim, the lady I had met in Ayutthaya and she was ready to meet me at the train station whenever I got there, which was maybe 2:30 p.m.

She picked me up in her cousin's car with her mom and aunt. They seemed to know everyone in town and somehow got all our tickets for free. She showed me the museum with lots of gold stuff that was hidden in the temples when the Burmese attacked 300+ years ago. Her cousin spoke English very well and helped me understand everything. She used to work at some pretty posh hotels in Bangkok for many years. 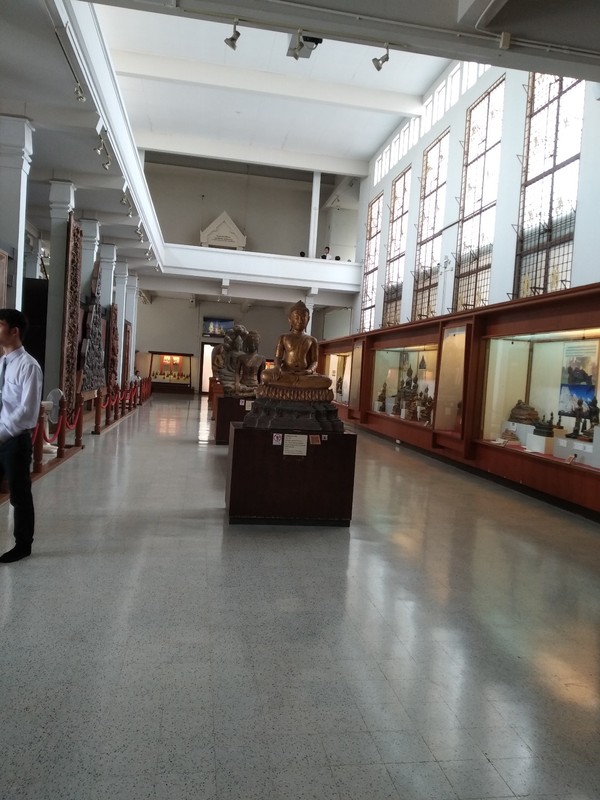 Then we went to the Portuguese village. Back in the day, people from different countries lived in little ghettos on both sides of the river. There are some ruins of a graveyard and a church that was flooded about eight years ago. 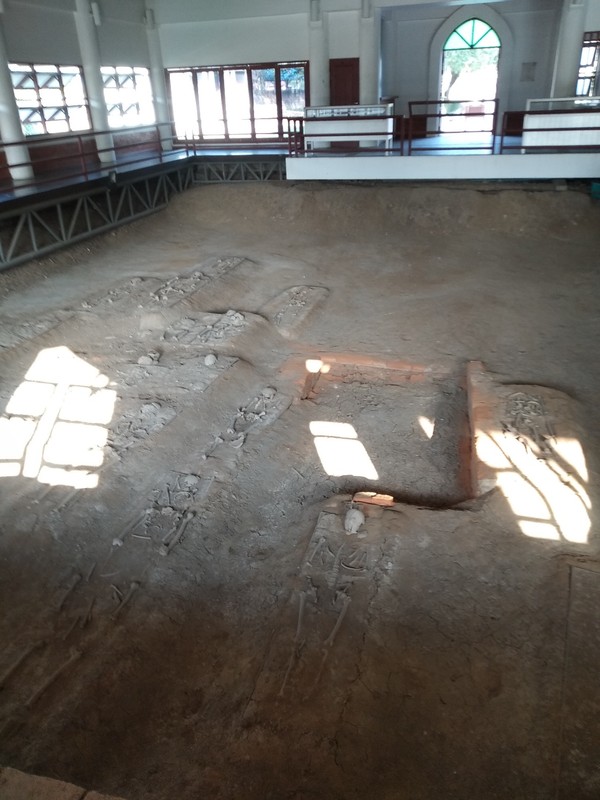 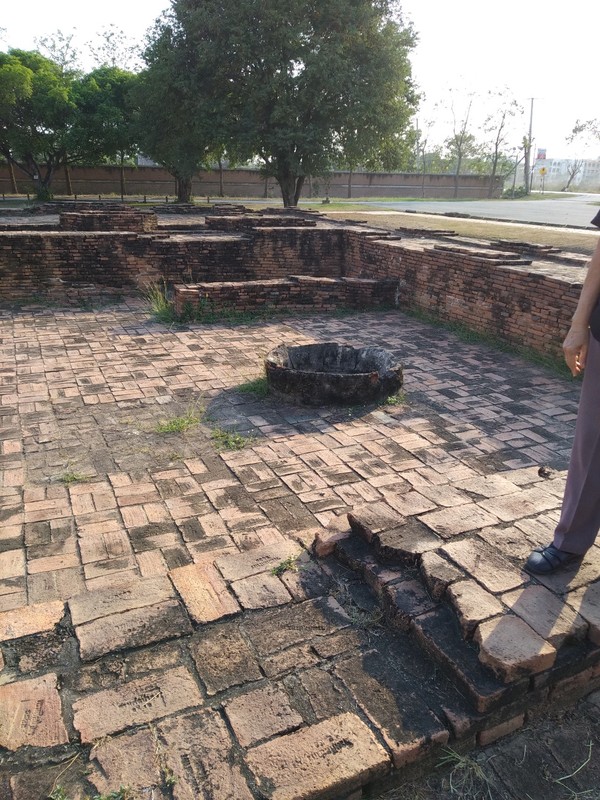 Then we went to go look at a buddhist retreat that Pim's aunt helped build. It must be a peaceful place to come and contemplate absolutely nothing. 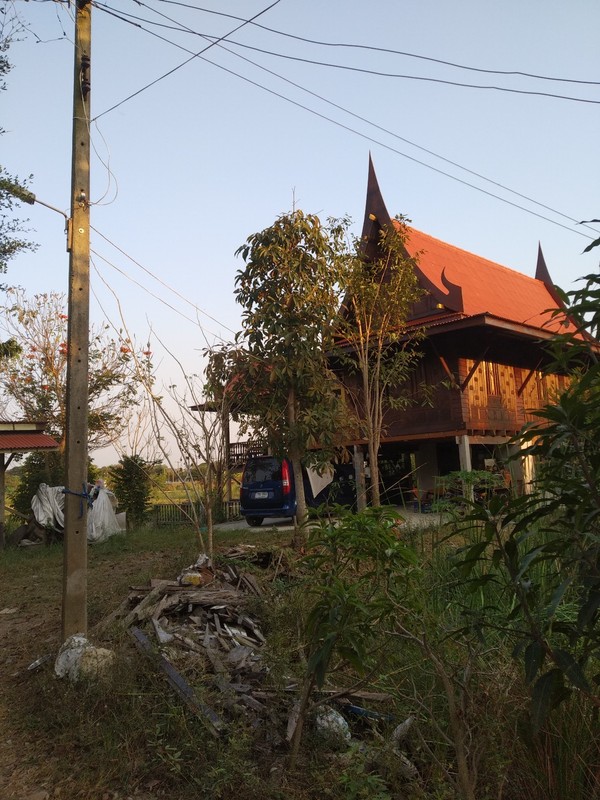 We saw the sunset at another temple and it was definitely the most beautiful out of the four temples I had visited in Ayutthaya. We also tried to pick up some paperwork at a government office for Pim's visa to study tourism in Spain. It didn't happen though. She wasn't optimistic about it, explaining that Thai bureaucracy is awful. Believe me lady, I know. 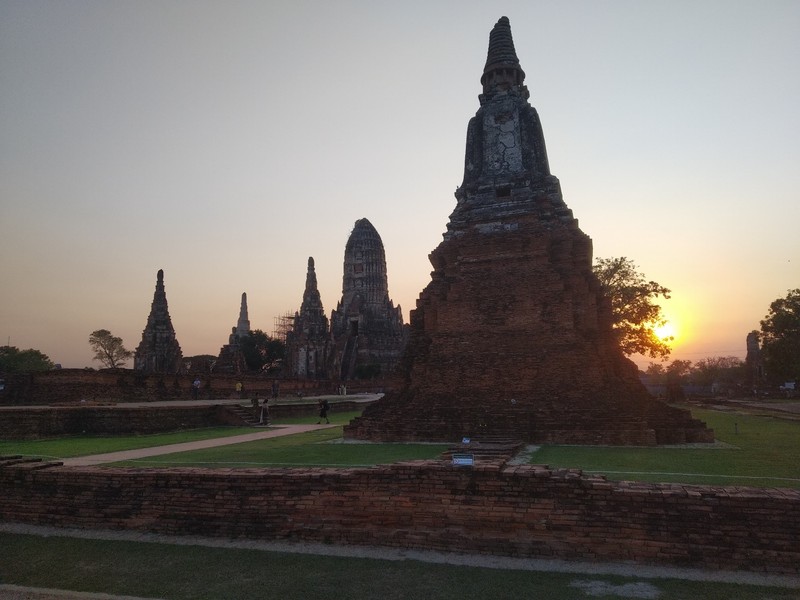 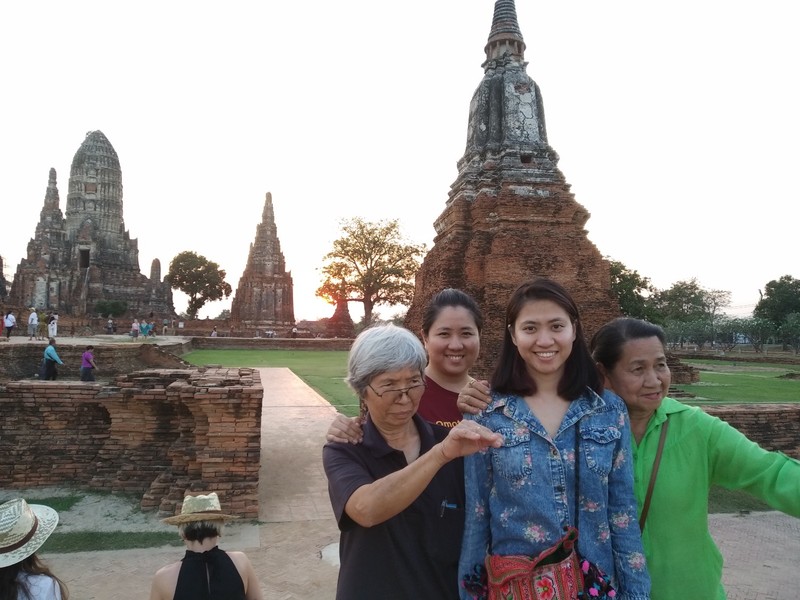 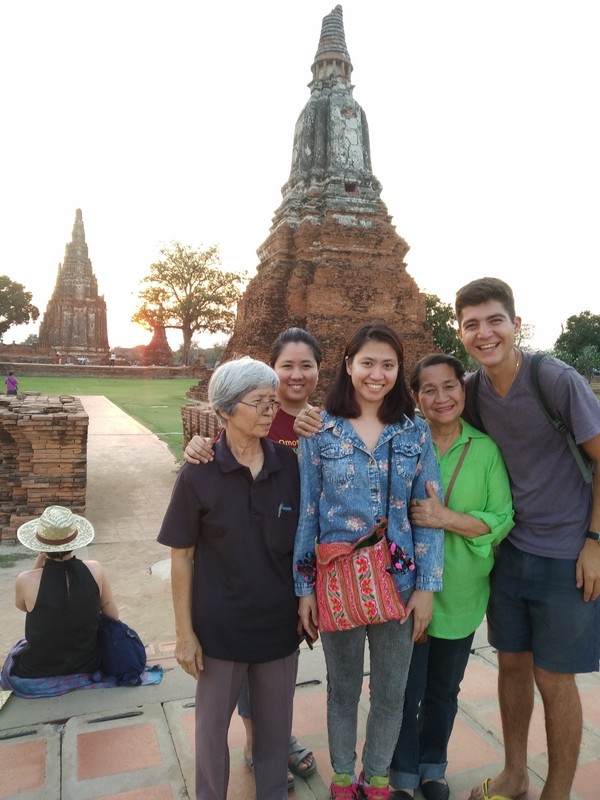 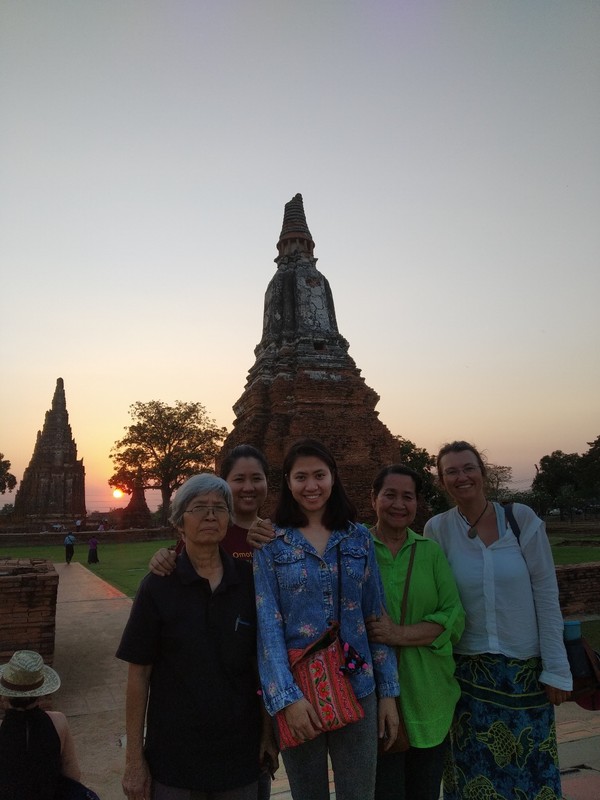 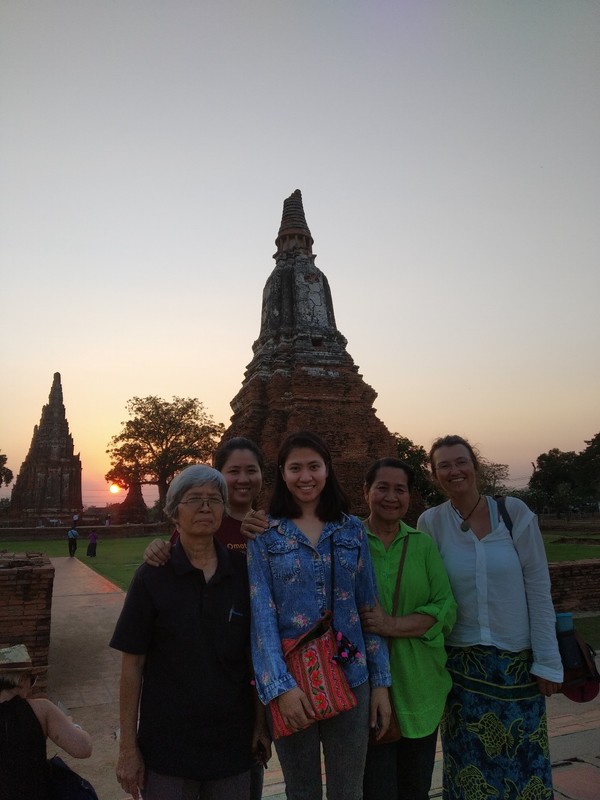 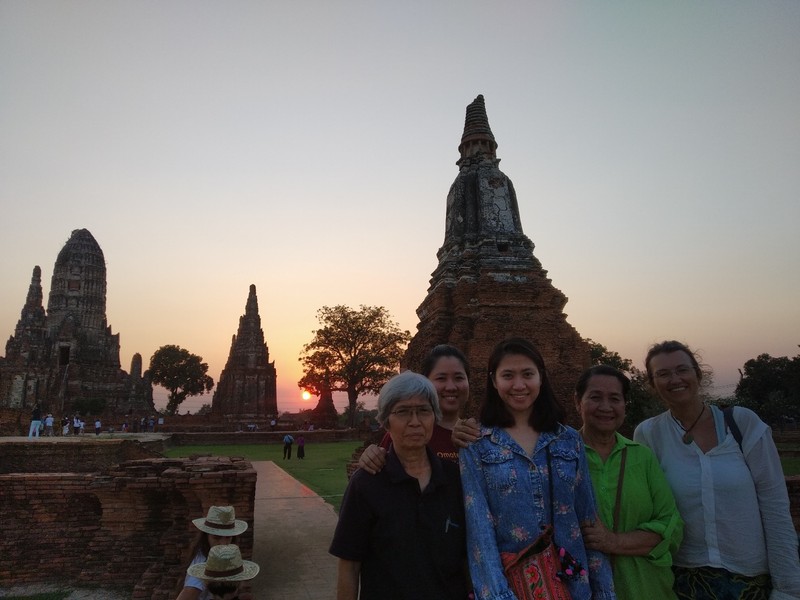 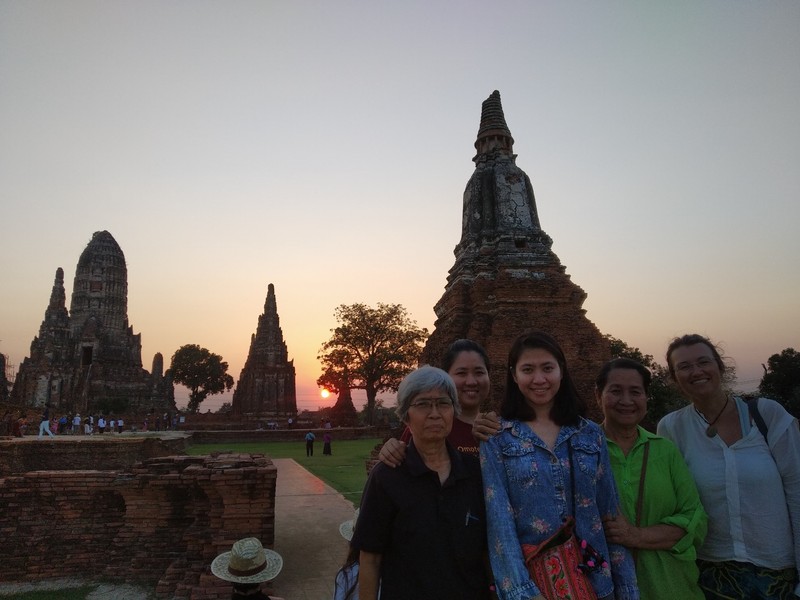 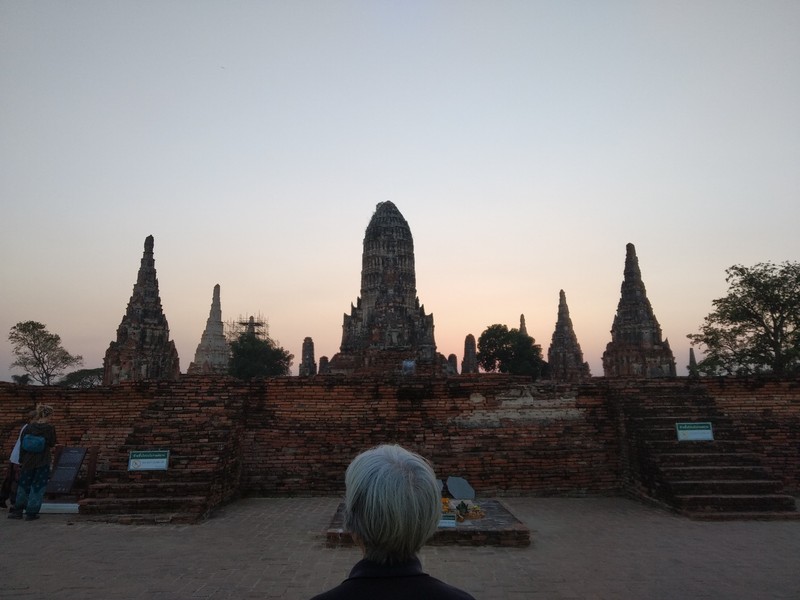 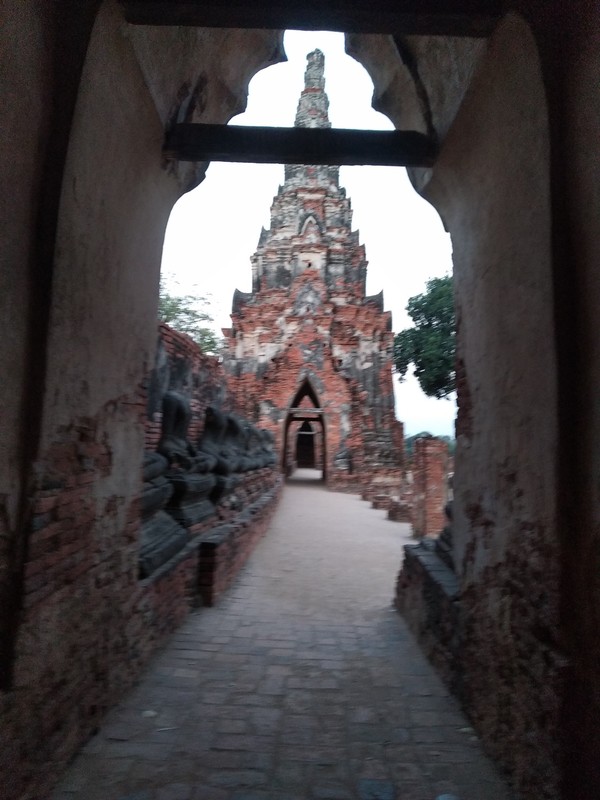 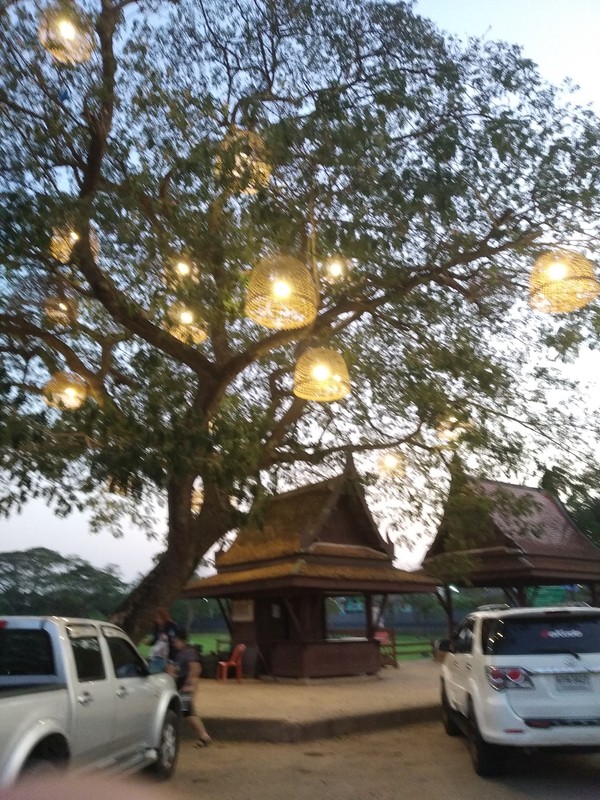 I was very grateful for them taking the time to be so kind to me. After they brought me to my hostel to checkin, I bought them all dinner of barbecue fish and hot pot. The fish was soooo sweet and delicious, it was scooped right out of the river that same day. I was really happy to have spent the afternoon with all of them. 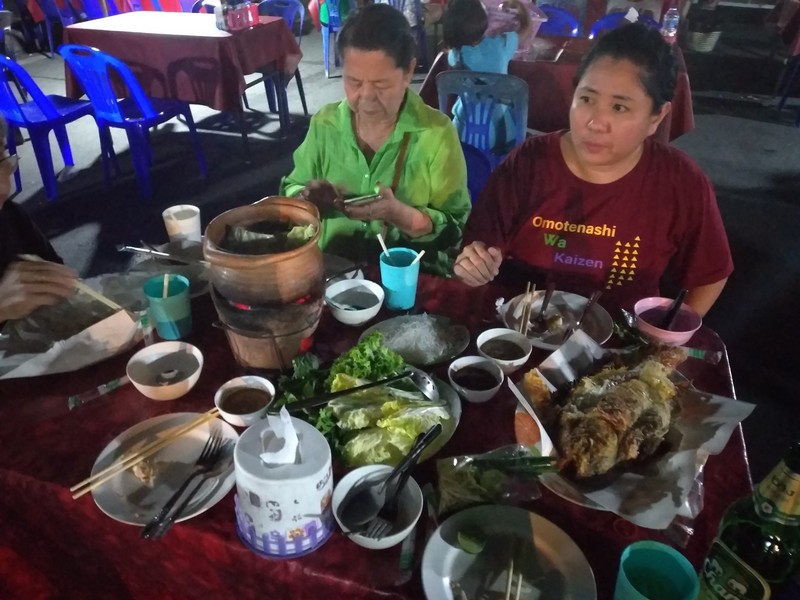 February 21, 2019
At this point I was mentally ready to go back home. My boss had already sent me my work schedule and explained the premise of the courses I'd be teaching on Monday. I was too exhausted to go anywhere else. I decided I'd get my teeth cleaned and hair cut. It was really easy to do this and the dentist spoke English, so it was better than doing it in China. 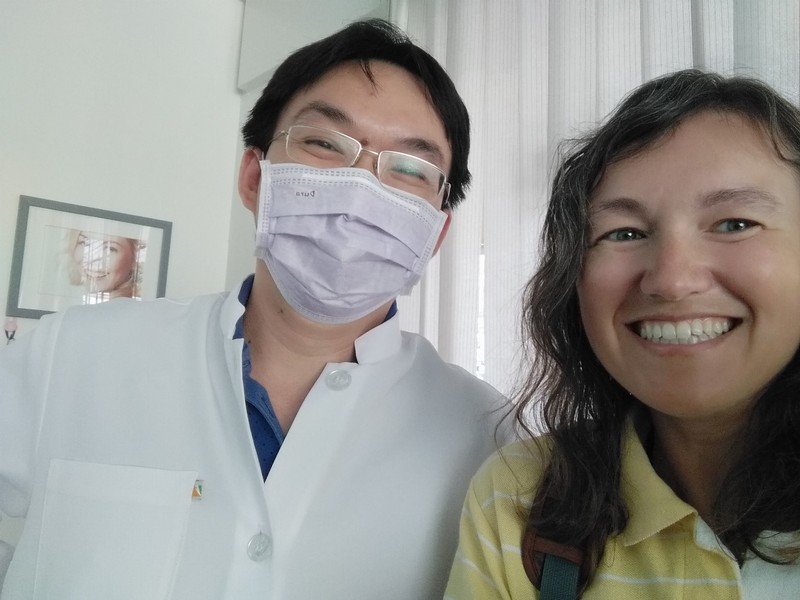 The hairstylist didn't speak English but that was fine anyway. 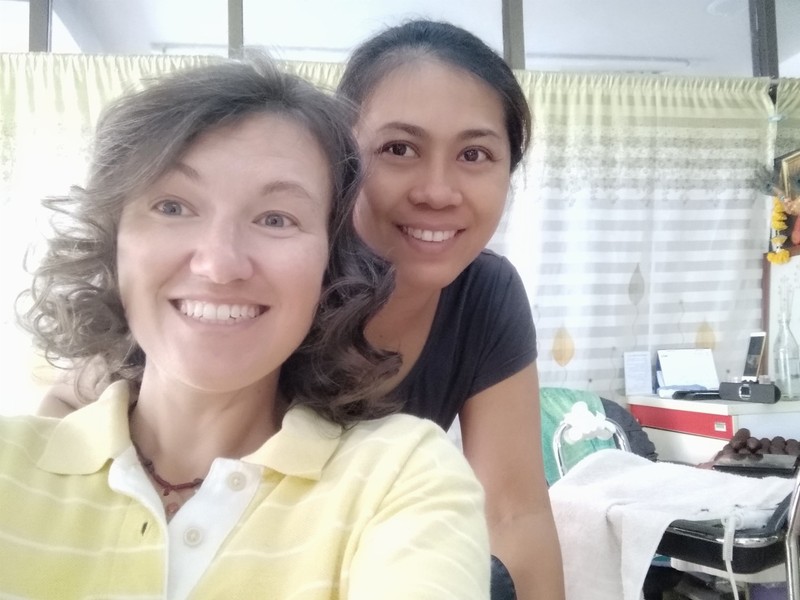 On my way home, I bought three huge bags of Thai tea, so I could make the classic drink at home. I met a Peruvian lady and we had lunch together near our hostel. She had just gotten to Thailand, so she was very excited. I was at the end of my trip and tired. It was an interesting lunch to say the least.

The rest of the night was spent chatting with an Irish guy who had Aspberger's syndrome, by my own diagnosis. We watched the sun disappear behind the pollution and went on his scooter out for dinner. I bought a slurpee and filled it with whiskey. Later we had more whiskey sodas on the roof with a couple of Germans. And I learned all about Irish history.

I was not motivated at all anymore, but I needed to go out and find a sock thingy to make Thai tea with. I found a small one in the market and then also found some more rain boots just like the ones I had lost the week before. I had some ice dessert thingy and chicken rice and went back home. 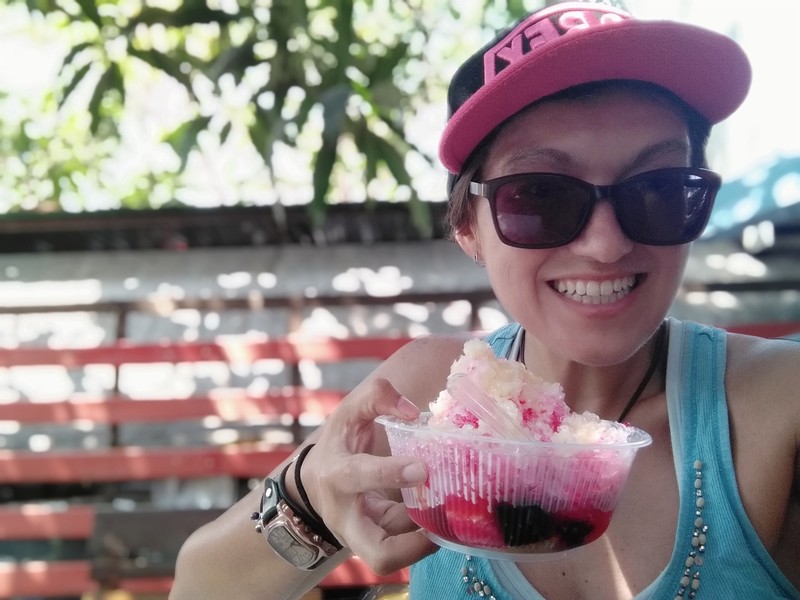 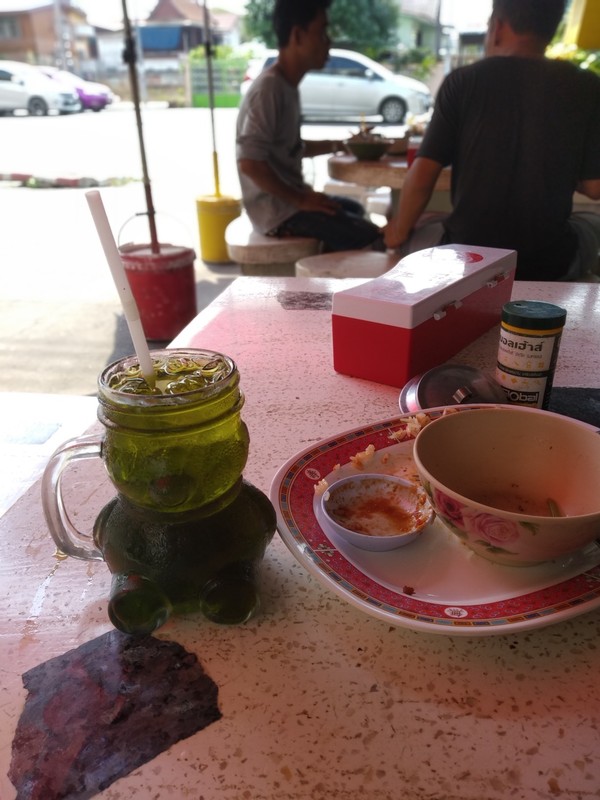 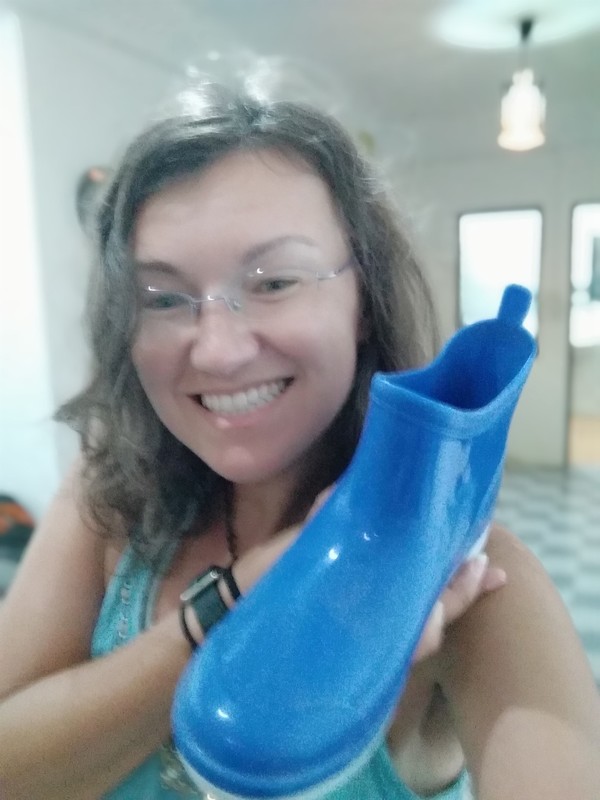 I was tempted to get a manicure or a massage but I was down to my last few hundred baht so I didn't. After a nap, I woke up at 6 or 7 p.m. in time to make a plan to go with Darren to a floating market near his house the next day.

February 23, 2019
I left as early as possible on the train back to Bangkok, but it didn't end up being that early. By the time we got to the market, it was no longer floating. Anyway, we had huge cups of chrysanthemum tea and lunch by the canal. 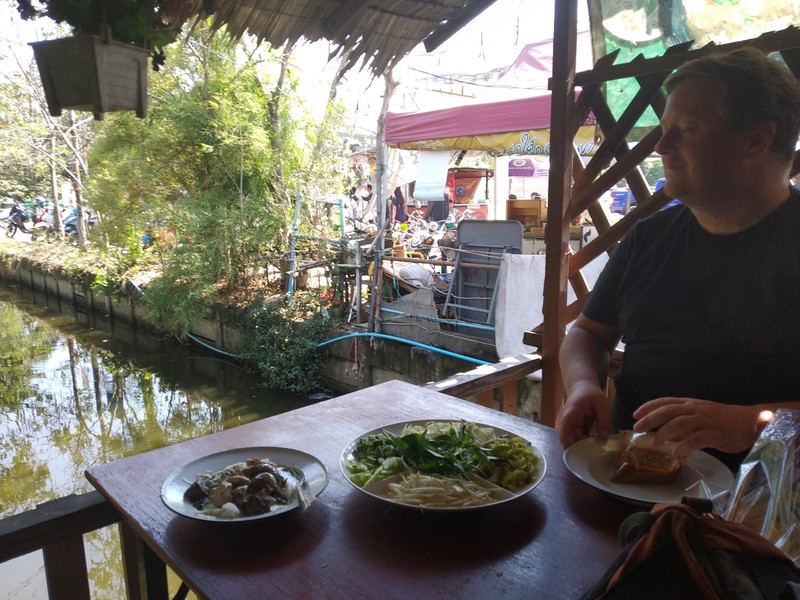 We rented bikes and went around the island. There was a park on the other side, so we biked around, climbed up the bird observation tower and hurried back to the ferry. I had to pick up my passport that I had left as a deposit for the bike by 5 p.m. and it was probably 4:15 p.m. So I was a little stressed getting back there. We ended up meeting two ladies from Ottawa who were also hurrying back to pick up their passports, so it was all OK in the end, and we made it back with about five minutes to spare. Phew. 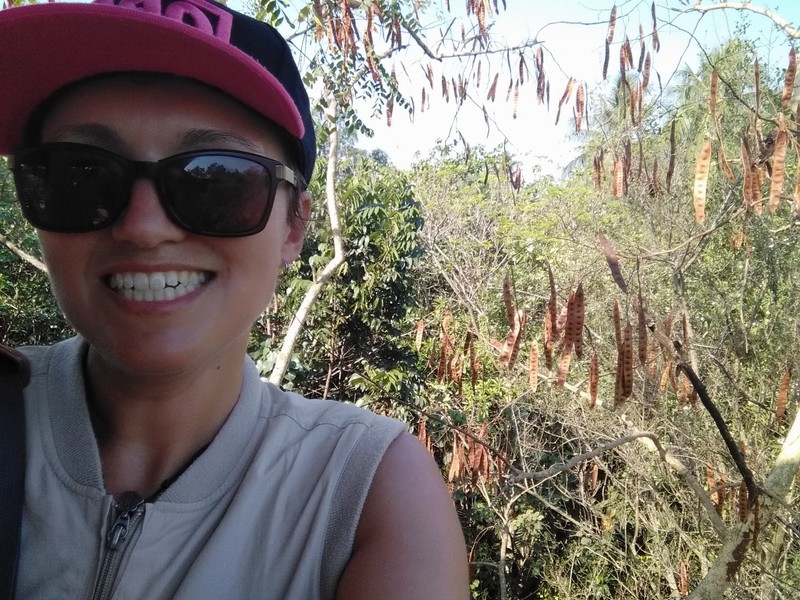 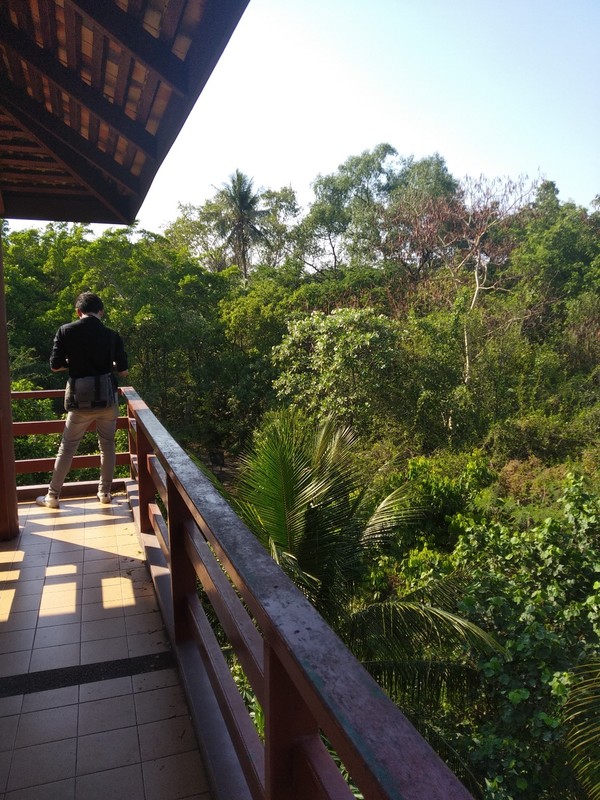 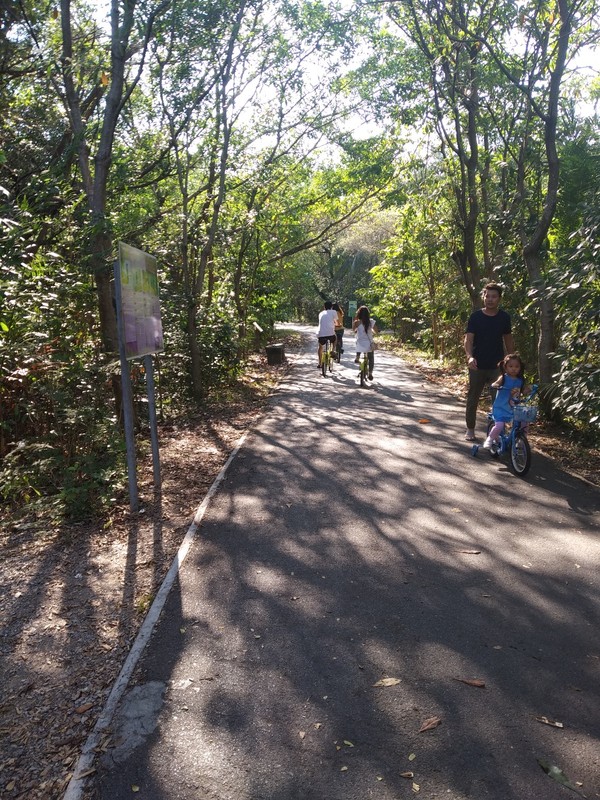 We took the ferry back and I bought a bunch of food at the market for the long trip back home to China. 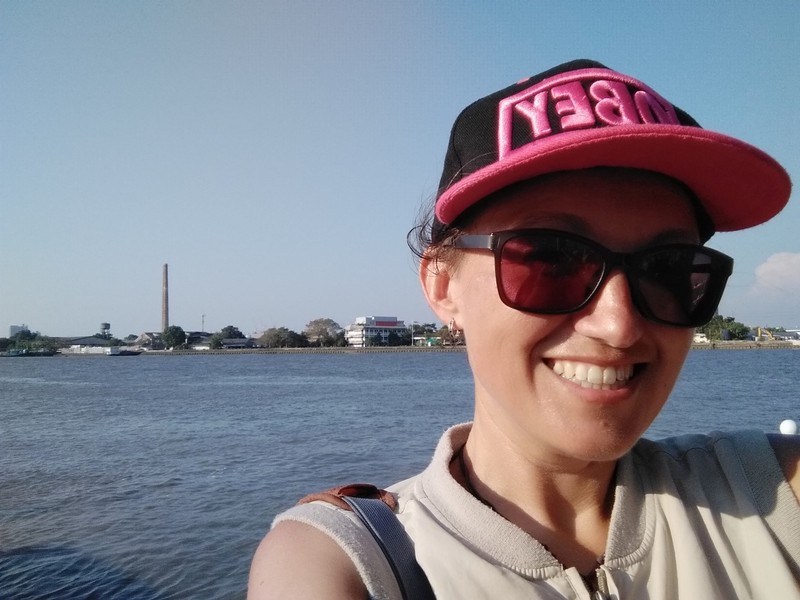 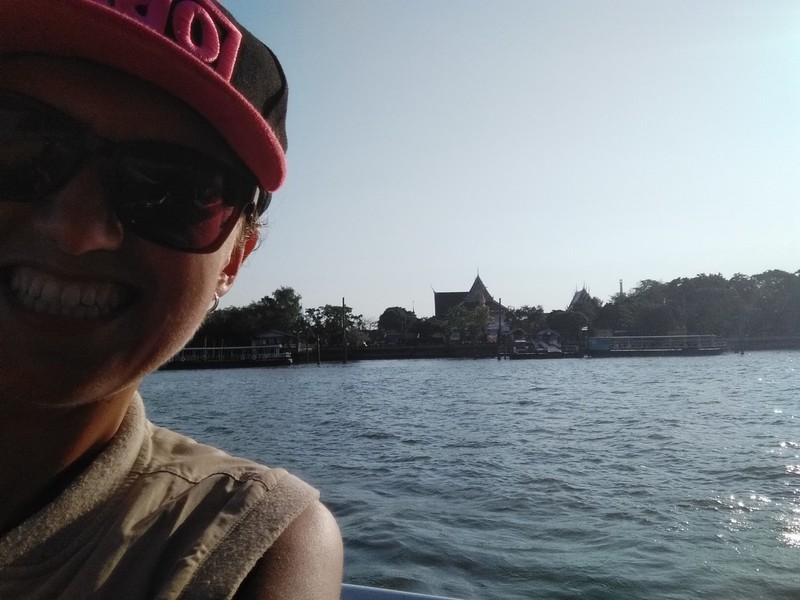 Then we went for a quick, cool swim and Darren was nice enough to buy me a taxi to the airport. I had a plan to sleep for a few hours at a hostel but it was not good when I got there, so I just cancelled the reservation and slept at the airport in a massage chair. 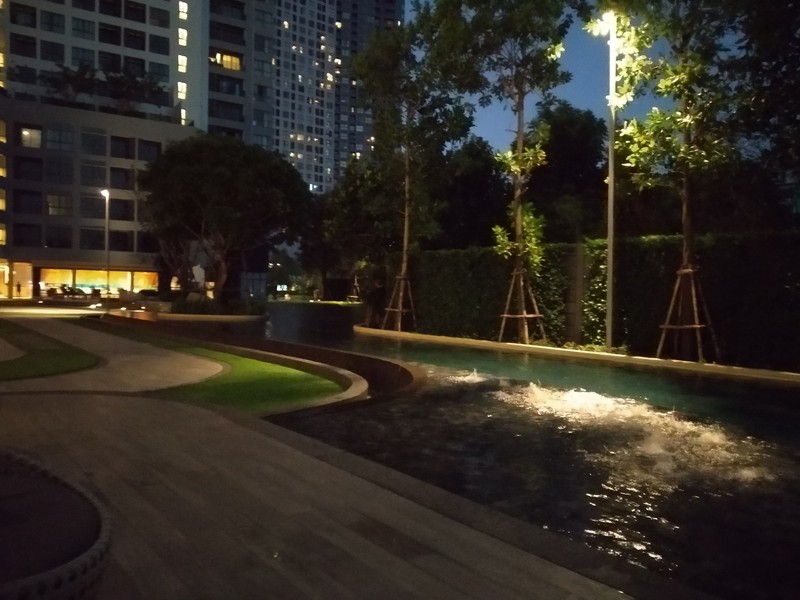 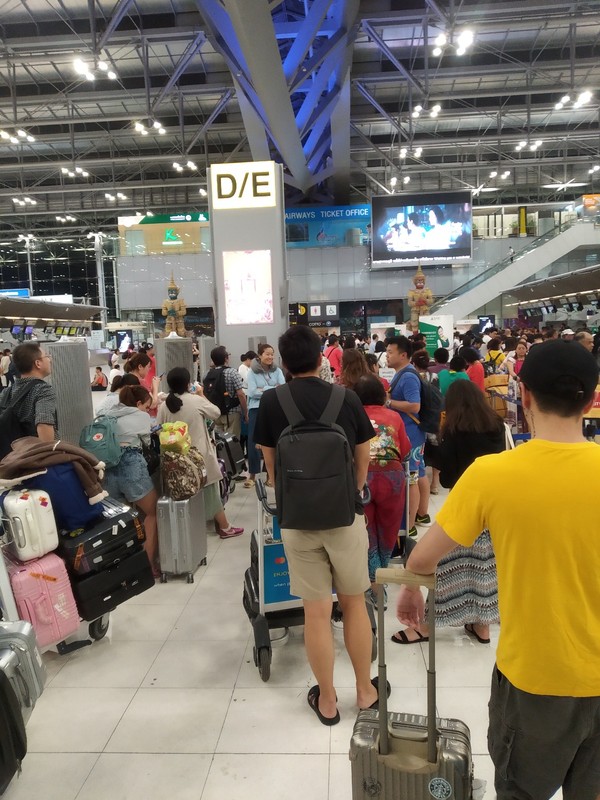