I got on the wrong stupid plane

OK, so the flight to Dulles airport was just fine this time.

Going through security was kind of lame, because United charges $20 for EACH checked bag. What most people do, is chuck the liquids and then check their bag at the ticket checker lady. This ends up being more convenient, aside from the longer security line, because you can just grab your bag as soon as you get out of the plane at your destination. No more lost bags!

Anyway... my flight to Ottawa was boarding on time in gate A5. Remember that, because it's important. I had about an hour to kill before it got there, so I sauntered on over to the Duty Free for some shopping. This is also important.

I purchased a couple of bottles of liquor for super cheap and the lady at the counter asked if I wanted it delivered to my gate. Would I?! I sure would...

So, I'm killing time, using my free Boingo wireless card that I got in Chicago in the summer, totally not paying attention to any announcements that would inform me that my plane was leaving from a different gate.

Finally, it's time for me to line up at gate A5. There is a line of people going through the ticket counter. Everything is normal. I give the guy my ticket and ask him if he has my duty free stuff.

"Oh no, you get that on the plane." OK cool, no problem, I follow this line of people, with my "sky-checked" bag and check it onto the plane with everyone else. Still no problems.

I get onto the plane and ask the flight attendant where my duty free stuff is and she has no idea! OK... weird... she says she'll go look for it, and so I sit down in my seat. The one that matches the letters on my ticket.

The flight attendant comes back onto the plane and says...

"Excuse me, where are you going today?"

"Oh there must be some mistake, this is the plane to Newark."

"What?!" I jump up from my seat and run down the stairs. One problem, my bags are already checked on the plane to Newark! A tall, skinny black man with those giant orange plastic ear muffs on sees me freaking out and he helps me find my bag. Meanwhile, a big black lady with massive cornrows and hardcore sunglasses is frantically gesturing at me to get out from behind the wing of the aircraft. The short Asian guy that checked my ticket at the ticket counter is waving at me to tell me to get onto the plane to Ottawa. The first man grabs me and MAKES me run behind a bunch of planes, I can feel the heat emanating from the engines. They're all about ready to take off. I imagine my head getting completely vaporized because some pilot pushed the wrong button at precisely the wrong moment, and I run screaming, behind him, terrified.

Meanwhile, the other people are yelling and screaming at me like I'm going to accidentally set off a nuclear holocaust out there.

So I just... freeze... and scream some more... not a cool, sophisticated scream like agghhhh! or something, no... a high pitched, little girl, temper tantrum, idon'tknowwhatyouwantmetodorightnowi'msoconfusedandscared scream. You had to be there, really.

Eventually they figure out what is wrong with me, and they nicely usher me onto the right plane. Phew. I sit beside a nice blonde lady and we flip through the sky mall catalogue and talk about boys the whole way home.

The customs agent tries to charge me for my second bottle of vodka. I had no idea it actually was vodka. I thought it was some kind of fruit mix drink thing. It was going to be $30, but I talked him out of it by batting my eyes and smiling sweetly. OK, so that's a lie, but whatever, he was just nice and I learned not to try and buy too much vodka at the duty free. And now, I am warning you dear readers.

Yes, buy things at the duty free, because that stuff will save you from being accidentally sent to Newark. But for god's sake do NOT buy two of them. 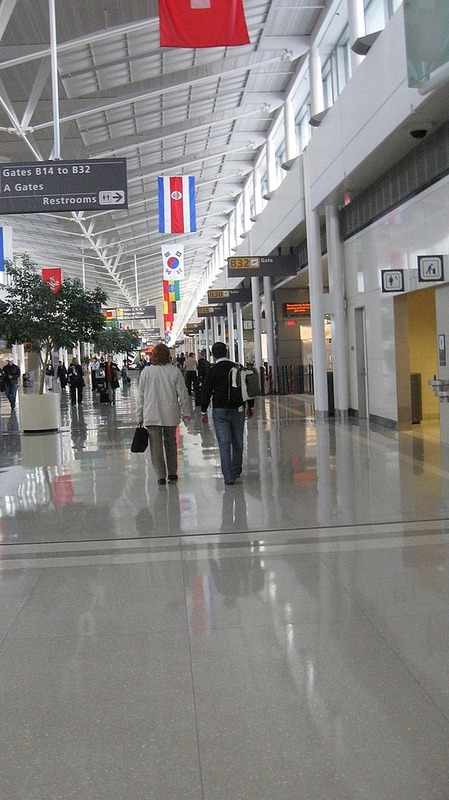