I hitched a ride with my students again on Friday night. One of them has a class at the college nearby Kalinka, the restaurant I wanted to try because it has such rave reviews on Trip Advisor. So, he dropped me off there. I was kind of excited to go there because the atmosphere looked so chill and amazingly beautiful.

When I got there, the photos were realistic. A beautiful wooden patio with soft white lights greeted me. I sat down and felt something digging into my posterior. Oh, it must just be the splinters from the wood and I ignored it.

I ordered a beer and a hamburger, the waitress said it was their specialty. The beer came, and it was cool and smooth. They sent me the person who spoke the best English and he explained it was locally brewed and that the BBQ hamburger was very good.

Twenty minutes later (at least) it appeared with ice cold fries. When I tried to take a bite of the sandwich it just crumbled and the insane amount of sauce exploded all over my face. I asked the English waiter to get it cut in half. They had already given me a butter knife to cut it with, which was already a disaster. This time, I wanted it cut thinner, like... horizontally??? And I made the motions with my hand. My hamburger came back in pieces like dog food. I told him I wasn't paying for that so they finally brought me a thinner one.

I tried to enjoy the crappy John Mayer cover band and attempted to eat my new hamburger, finally. A few minutes into it, some guy came to borrow my chair. I let him have it, obviously. Suddenly I felt that weird stabbing in my butt again. When I reached down to see what it was, I was rewarded with a giant gash on my thumb. Seriously??? WTF was this restaurant's problem??? I told everyone who had anything to do with my experience at this establishment, and the English speaking waiter said it's not their fault I got glass in my hand. Oh really? Whose was it then? It certainly wasn't mine...

They left me alone for a while and the waiter told me someone at the chair guy's table wanted to buy me a drink. I asked why, and the waiter lied and said he didn't know... I asked for the drink advertised on a card on the table, a cucumber martini. Sounds refreshing right??? But of course, they didn't have it (why advertise it if you don't have it?) and he brought me some chocolate abomination instead. Thanks for that, old man at chair guy's table... I guess... and I waved and smiled thanks.

The old man at the table came over and launched right into his pitch. He used my iPod to tell me he wanted me to go to his hotel and take a shower. Needless to say, I was furious. I translated back that I wasn't a prostitute and that he was a bad influence on the young men at his table.

Something must've gotten lost in the translation because he abruptly said "I'm not gay!" and left.

Well... that was one way to get rid of him I suppose.

After that drink, I wasn't feeling too good, so I figured it was best to leave, on the off chance the waiter and that man were in cahoots and had slipped something in my drink. I went to the cash to pay (only for the beer) and saw one of the young men from the old man's table on the restaurant land line. WHO ARE YOU!? They WERE in cahoots!!! The waiter told me he was the owner. THEN I was REALLY pissed.

Now I was not only angry, I was also afraid I had been drugged and that these strange men who owned this terrible restaurant were making arrangements to bring me back to their hotel against my will. I was even more furious than before. I told them that I wasn't paying for anything, and that I was shocked that the owner of this fine establishment would imply that I was a prostitute. I ran out to the nearest bus stop as fast as possible. I was waiting for the bus, frightened I would suddenly black out, but it was better to pass out at a random bus stop than in that bar.

The bus eventually came, and I was feeling feverish and a lot more drunk than I should've been after one beer and a martini, but I was safe at the intercity bus station. My bus to the beach left a half hour late and then I was off, never to return to Kalinka again. 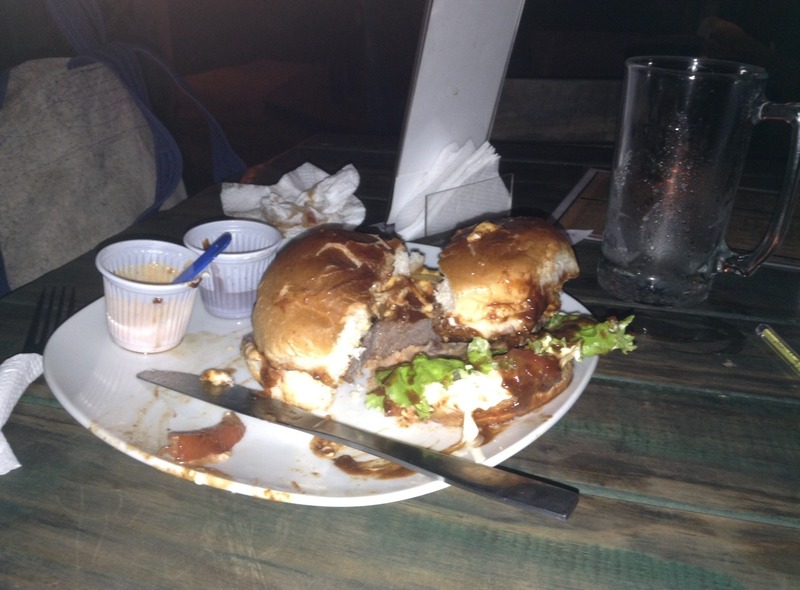 The first attempt at cutting the burger 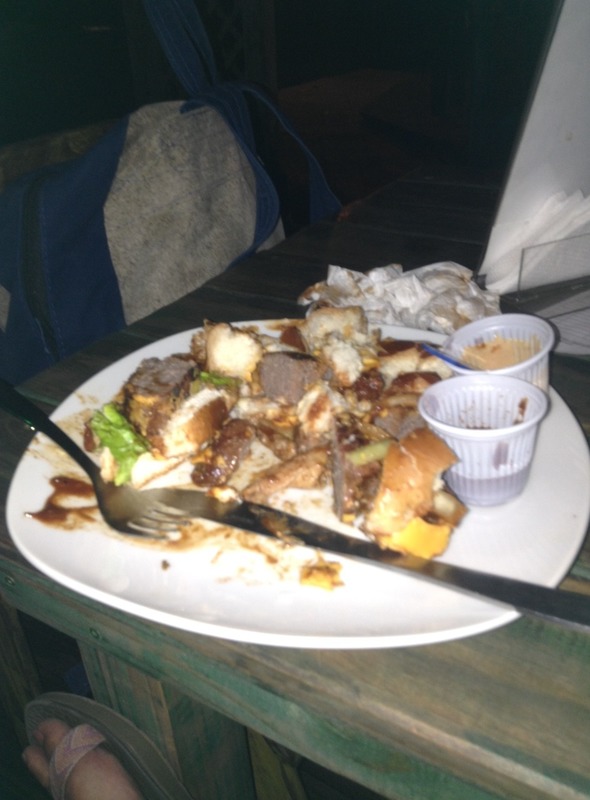 This is what the chef did 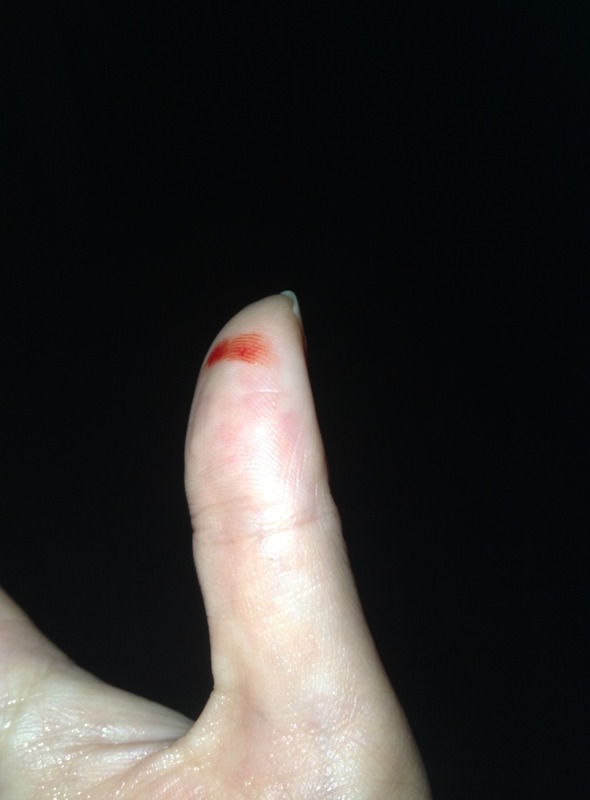