We drive to Woodstock, almost...

So this morning we flipped a coin in the car and it told us to go to Bethel, NY, the place where the famous you know, Woodstock thing happened.

We knew it wouldn't look like anything in the winter, but that wasn't the point of it.

After Dave's dad called him, he had a change of heart and decided we should turn back and go home. His dad was kind of worried that we would get in an accident I think.

So we missed Woodstock by maybe an hour drive. I figure it probably wouldn't look any different than any other field in New York, but who knows.

We just drove back home the same way we got here. We stopped at the Duty Free and Dave smuggled in some native cigarettes. With my crazy record, I did not chance it.

On the way back, the 416 was backed up with TWO PLOWS driving SIDE BY SIDE for about an hour. It was so crazy. I had heard of this happening in urban myths, but I had never witnessed it myself. Incredible.

And that's the end of the trip! I managed to get to bed before midnight and start 2010 on a kind of random and awkward foot.

But hey, that's how she goes.

Update: Dave finally sent me the list of things we did in Albany, so in no particular order:

1. Made faces at a baby.2. Bomber's Burrito Bar, the night before it closed for a month.3. Drank terrible alcohol/speed thing, and luckily didn't have a heart attack

4. Karaoke'd Renegades of Funk and Dirty Old Town 5. Saw the modernist Stonehenge and an after-hours mall with beautiful paintings in it6. Saw the winter light show

7. Saw a terrible punk band and left without paying8. Passed by Cairo, Amsterdam, and Mexico.9. Conquered the catskills.10. Almost went to Woodstock

We randomly decide to go to Albany

I woke up this morning pretty late. By the time I manage to get out of bed, I give Dave a call to see if he's still up for our trip to Vermont.

Last night, we firmed up our Couchsurfing host and made sure the Ben & Jerry's factory was open on a Saturday. It was, so we were ready to go. Or so we thought.

"Hey Dave, when are you coming over to pick me up?"

Dave shows up in 20 ish minutes and says:

"There is bad news. We can't go to Vermont, BUT we CAN go on a roadtrip."

"There's a big storm in Vermont and my dad won't let us take his van into it. So we can go anywhere west of here, but nowhere to the east."

Oh great, right? So we peruse the map, and ponder going out to Sault Ste. Marie or northern Ontario.

So there we have it, we decide to go to Albany. I read about the amazing reflection pool and Empire State Plaza, a place with a "monolithic" modern Stonehenge. Sounds awesome.

Off we go, we drive until we hit the border and here comes the hard part all the time. They predictably pull us over (as happens with me EVERY time) and we sit waiting for the inspector to question us and search the car.

I have to pee, and (as usual) they don't let me go until I have talked to the inspector.

I distract myself by making a face at a baby sitting in front of me. This was quite amusing for a longer period of time than I expected.

Before we knew it, the car was searched and we were questioned, and then off we went again. I'm always paranoid they are going to steal my stuff while they are in there, and when I couldn't find my mom's homemade peanut butter balls I brought along I was a little irritated.

Dave's Dad's van doesn't have a radio in it, so we have to make interesting conversation the whole way there.

This is not too difficult because there are many philosophical topics to discuss, as I'm sure you've experienced on any long journey like this.

We manage to come to agreement on many topics without pulling each other's hair out. We also ate a lot of peanut butter balls (I found them soon after we left the border station).

When we finally got to Albany, we headed straight to Bomber's Burritos. We read in the guidebook that there was the state's longest happy hour. It turned out not to be true.

The burrito was good, but the salsa was cold and the nacho chips were unremarkable. Also, the restaurant was closing for renovations the next day, so the array of beer on tap we were promised was whittled down to only two.

We asked the waitresses where they thought we should go for some music tonight. We were too early for the jazz band, and when we listened to the punk band, we decided it was dumb.

It was SO COLD we kept getting back in the car and driving somewhere, then parking again and walking a very short distance. We figured the best thing to do was check out the architecture in the Empire State Plaza.

We drove around until we found it, but when we went to go up the steps, we found it was closed. No matter, we just jumped over the fence. I was paranoid for a while, but when no security guard showed up for a few minutes we walked around betwixt all the imposing structures.

It was a little surreal, the wind was biting our faces and taking my breath away every timed I tried to walk into it. It was almost like we found ourselves on some distant post-modern planet. Very 2001 Space Odyssey.

Dave found a secret door into the underground city that is beneath the plaza. I was still paranoid that someone would come. It was abandoned. But there was a bunch of great abstract art and everything around was styled like 1950s futurist stuff. Awesome.

We kept looking for some sort of nightlife, and then decided on karaoke in the outskirts of town. It was definitely something else. A really strange mix of people show up to the Side Door Cafe to sing tunes. We fit right in.

I sang a couple of my greatest hits and then we went to go find a hotel to drink and pass out in. We stopped at a gas station that was selling 12% energy drinks for $3.

This thing was a heart attack in a can. I can't believe these things are approved by the FDA. I drank it and thought I was going to die. Never again.

I could not sleep for a long time, I kept flipping the channels and tossing in my sleep. It was terrible. 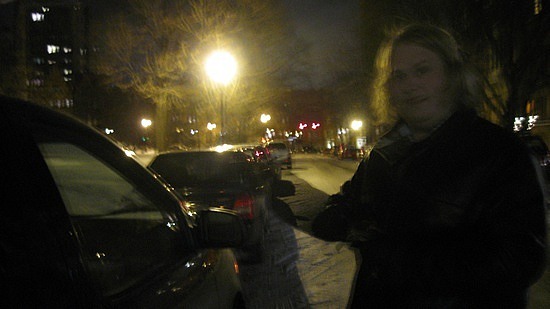 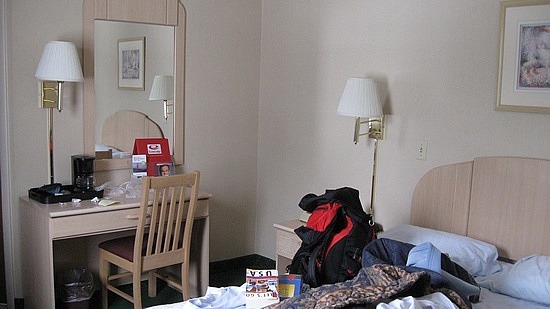 The Econo Lodge in Glenmont, NY 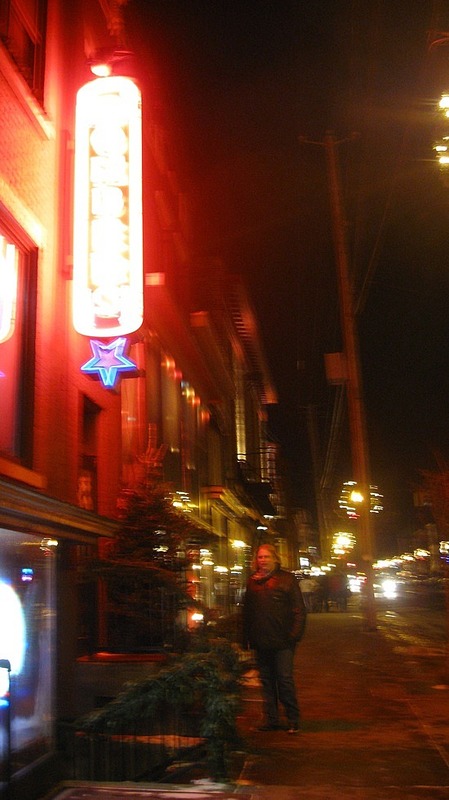 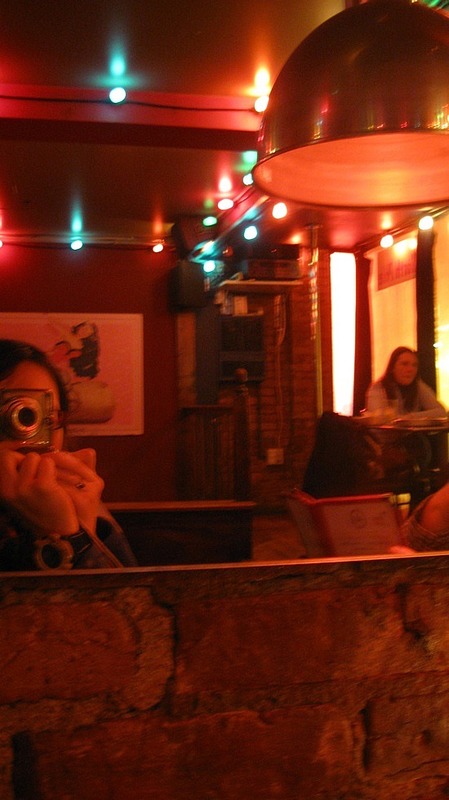 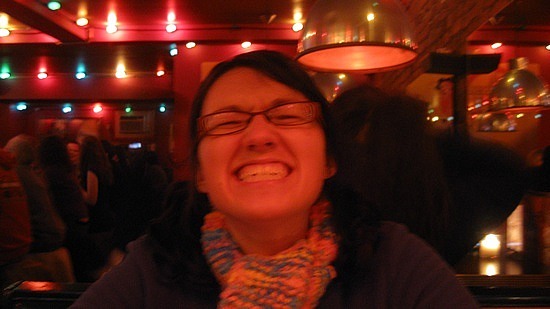 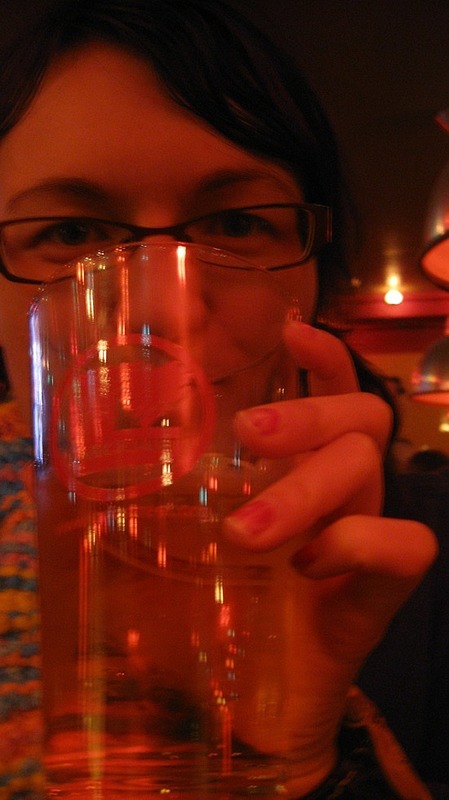 Me vs. Lark St. beer 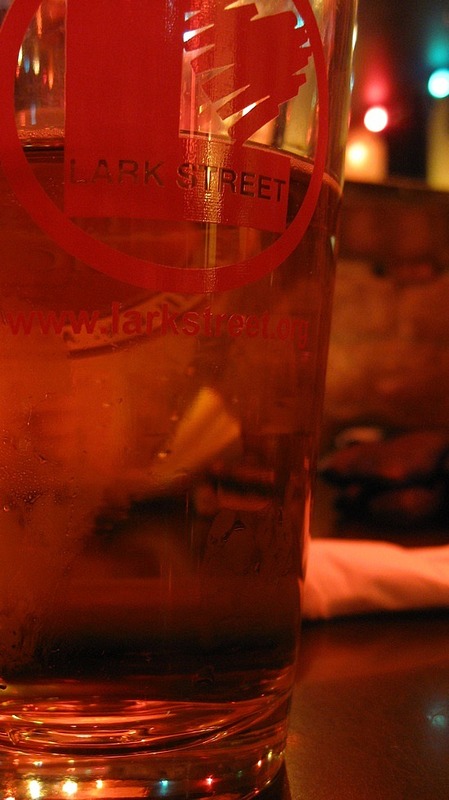 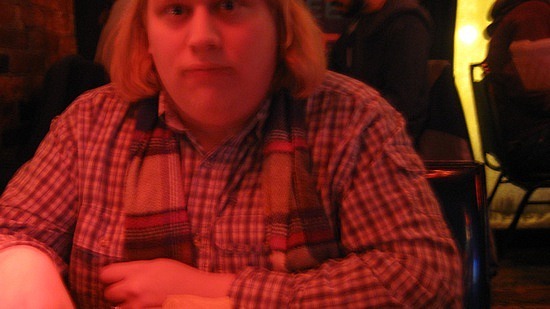 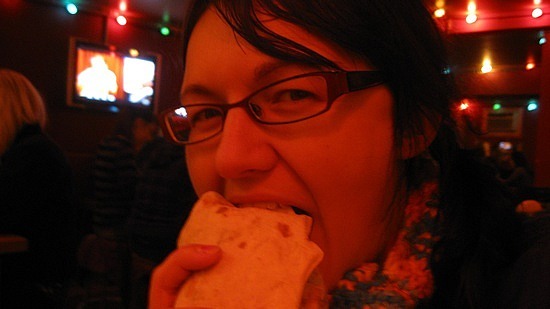 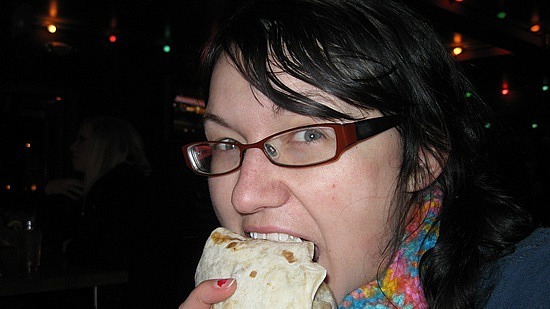 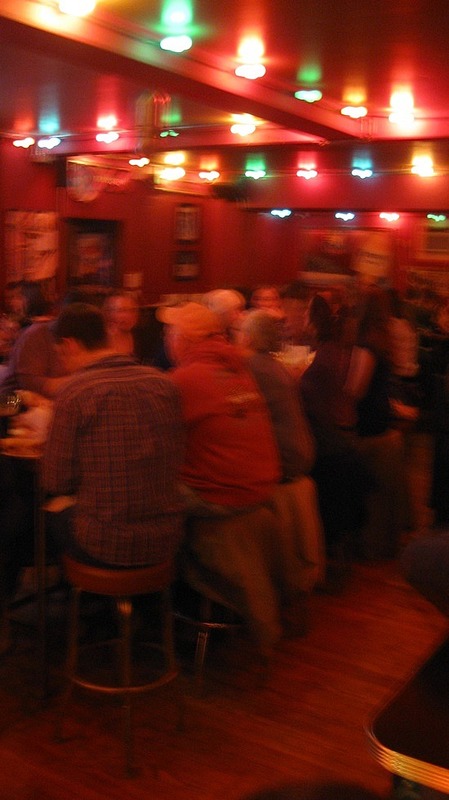 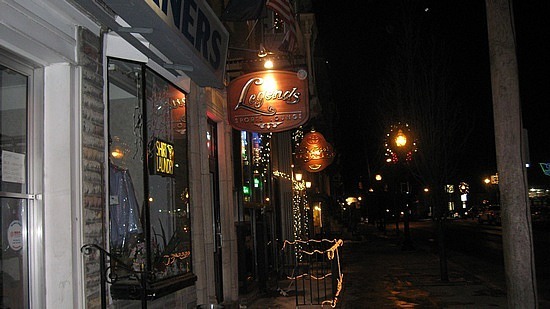 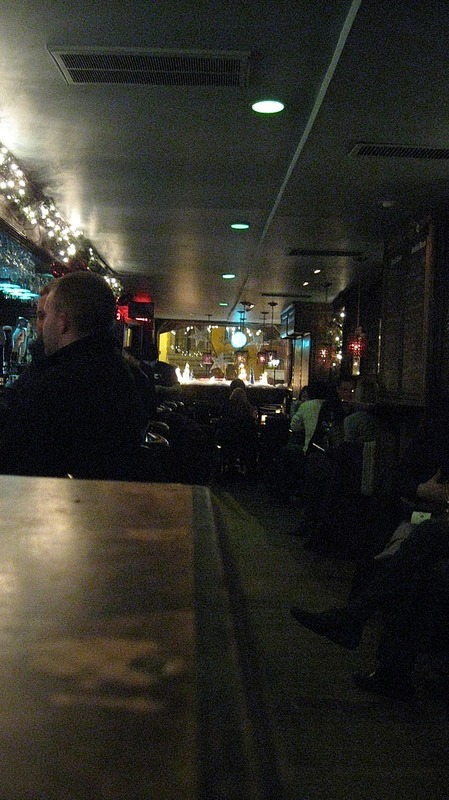 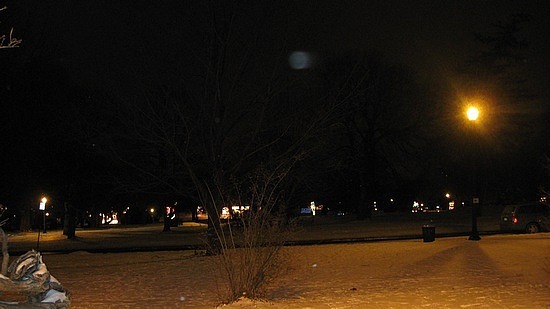 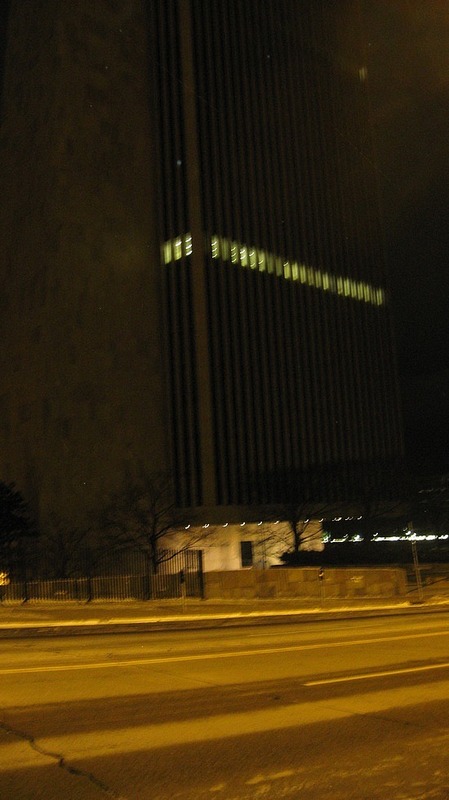 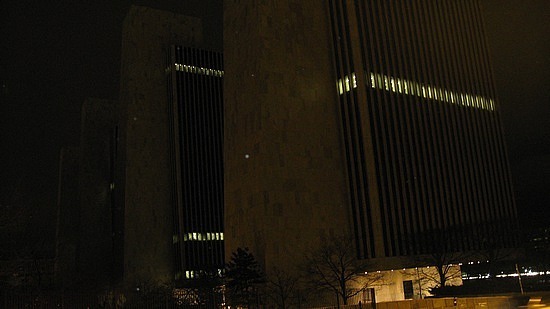 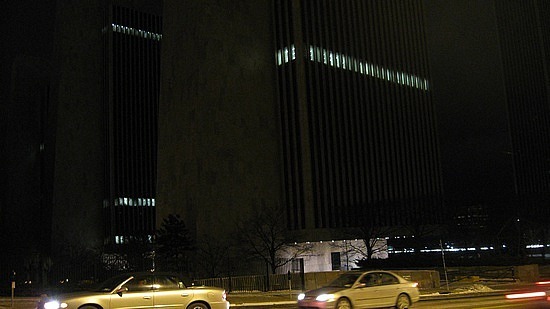 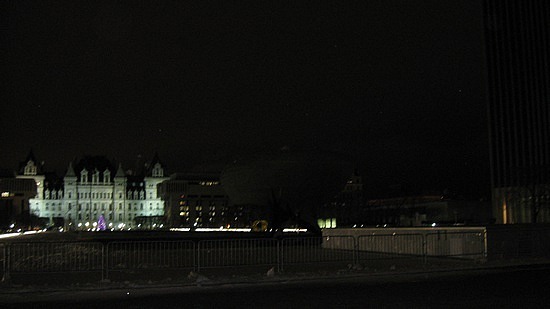 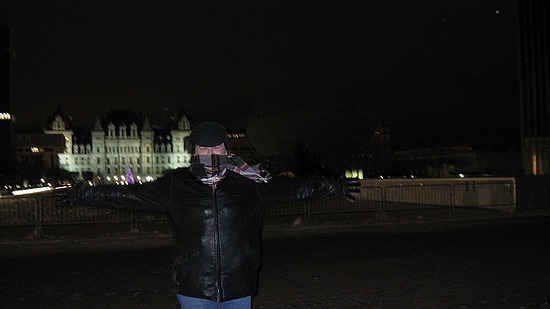 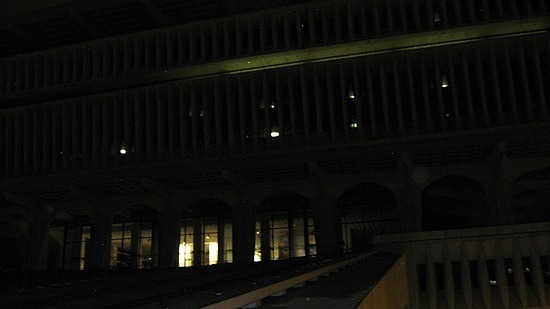 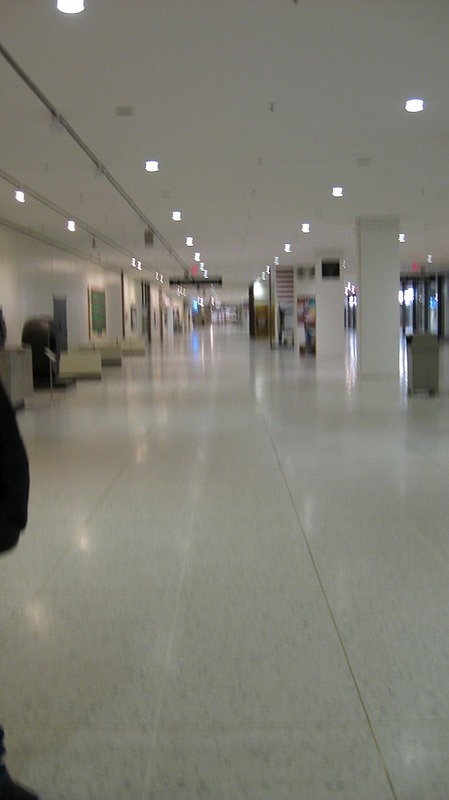 In the secret tunnel 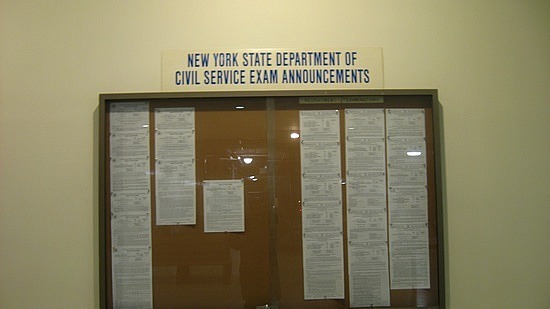 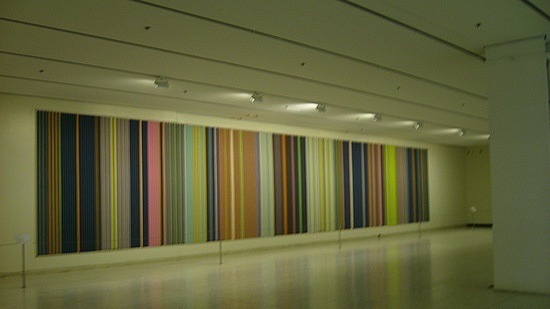 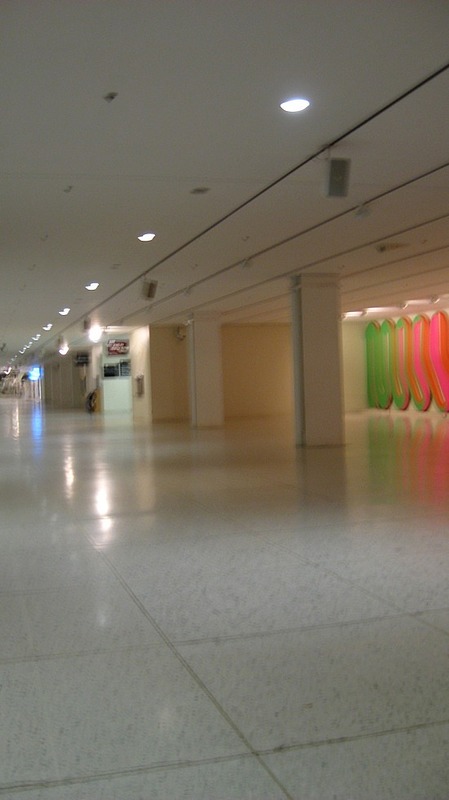 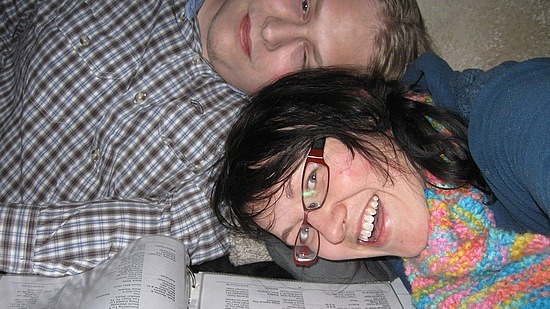 Dave and me at karaoke 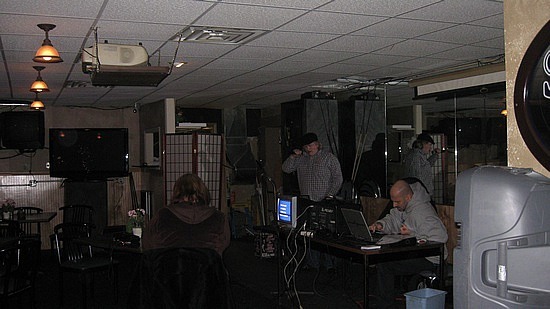 Dave doing Rage Against the Machine