Sam woke up at the crack of 8:30 and I stayed on Mandy's couch snoozing until 10:30. We had to meet the rest of the people back downtown, so we went pretty quickly, had some breakfast, courtesy of Mandy and headed out to the metro station. Mandy lives in Laval so it was a longggggggg ride. We made it to Pierre's house at 1:05 p.m., exactly the same amount of time that Jan-Mark was late for me! Ha! We had an extra person in the back, so it was a little squishy, like I said, but other than that, the ride back was also uneventful. I snoozed in and out of consciousness in the back seat and we sang to K's Choice all the way home.

It turns out Nick lives pretty close to me, so after JM dropped everybody else off, he went home and Nick drove me back. Which was nice and convenient.

I still had those sausages, since the BBQ was cancelled, so I took my hibachi out to the park, roasted them and had a nice late lunch. Made in Montreal.

Next stop, Montreal AGAIN to hang with Mr. Richard of Vagabondish for Memorial Day weekend.

Shopping, the hockey game and a cancelled BBQ

I got up bright and early, packed everything I needed into one messenger bag (because I knew I'd be really nomadic this weekend) and biked downtown to meet Jan-Mark at "9:20 a.m." on Rideau St. Having an office in the market is awesome, because I can just leave my bike there, and pick it up when I get back.

I wasn't sure if I was waiting in the right place, JM said "meet me in front of the parking lot and that walkway to the market"... all right.... I stood around for a quite a while and didn't recognize anybody, but then I saw Andrew, hurray! He said that Alexandra (who was also supposed to come) "had an accident", but he didn't know what that meant exactly. However, he did know that she was alright. So I guessed I would find out about that later.

We got in the car and headed off. Since Alexandra didn't come, we had extra room in the backseat which was nice, because Jan-Mark's car is kinda squishy with three in the back. JM also brought his friend Nick, who was promptly recruited to join CS by the end of the weekend. We're all such lover-ly people, so I don't know how he could resist.

On the way to Montreal, Andrew taught me all about geo-caching, which he is absolutely addicted to. He goes every Saturday morning with some sort of group and finds all kinds of funny treasure all around the city. As we drove down the street, he would randomly shout out "oh, there's another one, it's literally, 10 metres from here, it's RIGHT THERE!" and then, we would drive away....

We got a little lost on the way to Pierre's house, where all the boys were staying, and we stumbled upon the famous Atwater Market. It was just bustling in the late Saturday morning, and we picked up a couple of sausages (spinach and goatcheese mango for me) for the anticipated BBQ in the evening. The Atwater market is a pretty typical one, in the summer it's bigger, because there are extra stands outside, but on this spring morning, the stands inside were overloaded with fresh smelling tulips, lots of colourful fruits and vegetables, fresh out of the oven bread and any cut of meat that you could desire. You couldn't walk down the aisle without being offered a different type of delicious cheese. We also stopped at the SAQ to pick up some wine for the "half-birthday" girl and our happy hosts.

Finally, we found Pierre's house and everybody but me dropped off their stuff. I had to carry everything that I had around, until I got to the BBQ tonight, because that's where I would be staying. *pout* Poor me.

I had forgotten to remind Alana that I was going to Montreal this weekend, so when we got in, I made sure to call her immediately. She had forgotten all about it, just like me, and had other things scheduled, so we couldn't meet up. I guess I will see her next time. Pierre lives about a 20 minute walk from Ste. Catherine St. so we pretty much went straight there. JM needed a fancy belt, and everybody else I guess, just wanted to wallow in the wanton consumerism that is the Montreal shopping district. Meanwhile, Andrew would stop and run around looking for his next cache. Pretty funny.

When we got there, we text-messaged Sam to see where she was, and it turned out she was about two blocks away. So we met up with her, and her friend Mandy, who she met while she was teaching in France many years ago. I am completely uninterested in shopping, (on this street especially) and while everyone else was oggling over Arcteryx outdoor gear, me and Andrew were looking for caches. Then, JM suggested we split up and look for his belt, I went with him and found one for a steal, of $260! Haha! He didn't buy it, by the way. After that, everyone was hungry, so we went to Les 3 Brasseurs and had some lunch. JM, still obsessed with finding a belt, went out with Andrew to go pick one up at Simon's instead. His belt-hunger satiated, JM was ready to start searching out a place to go watch the Montreal-Boston playoff game.

We still had a few hours, so we just hung around "people watching" as Sam put it, at Place des Arts. There was still a mountain of dirty snow languishing in the sun, so what do you know, me and JM had to go grab some and throw it at people. While I was busy collecting my slushy ice-balls, he ran up behind me and pushed me right into the freezing cold dirt and grime, left over from winter. I wasted my balls throwing them back at him. Our fight quickly came to a truce, as we noticed Nick and Andrew were sitting, with their back to us, completely unaware of the recent events. We got more balls together, and quietly ran up behind them, to surprise them with a chilly treat down the back of their shirts. Ha! (A man informed us he would be putting our snowball fight on YouTube, and I said fine, as long as you mention TravelPod.com in the credits! Hee...) Pierre's cousin, Patricia met up with us there. We were becoming a pretty big posse already!

We walked to the Bell Centre, which had a UFC match happening later on that night, so that bar was already packed. Just down the street was another one, and Pierre and Nick waited in line for about an hour, while Andrew, JM and I geo-cached some more. We found one down the street in an old tank in a park, making it my first geo-cache find ever! There was a little piece of paper you could write your name on, to say that you found it, and then we put it back. (It was attached magnetically underneath the tank)

By the time we got back, the line had gotten longer and Sam and Mandy were there, informing us that the BBQ had been cancelled. (Apparently Andreas had to go watch the hockey game with his boss... psshaw) By then, we were almost ready to go outside. We got a big table, and I ordered a "chicken sandwich" table d'hote, which was not what I expected. I guess in Quebec, "chicken sandwich" means pieces of chicken in between Wonder bread and then smothered with gravy and peas... strange...

We ordered a bucket of Budweiser which came with a FREE UFC t-shirt. We decided to all place a friendly bet on the game, and whoever won got to keep the t-shirt. It turned out to be Sam, who bet 3-2 in favour of Boston. (I bet 4-0 Boston, and was ruled out after the Canadiens scored the first goal of the game)

Ohhhhhhh kay, so that was a little more hockey than I could handle. The Canadiens lost, so we decided to go out to a club, since there would inevitably be no street parties. Pierre recommended The Loft, but I said Tokyo. Sam and I went back to Mandy's house and I played with Mandy's really cute black lab/cocker spaniel puppy while they got all dressed up in pretty clothes. Maverick, on the other hand, had a lot of fun completely terrorizing my shirt sleeves and gnawing at the bottom of my pants.

So, we drove back downtown to The Loft and everybody else was in a HUGE line, full of 18 year olds in miniskirts. Not really our scene, so we ended up heading to Tokyo LIKE I SUGGESTED IN THE FIRST PLACE. I had been here once before in like, 1999, and it was awesome. I am happy to report this club is ALMOST just as awesome. Jungle beats and breaks have been replaced by remixed 80s classics, reggaeton and R&B, along with some of the aforementioned 90s throwbacks. So that was a lot of fun too. We stayed until about 2 a.m. and Mandy and her boyfriend Pat drove us back to her place. 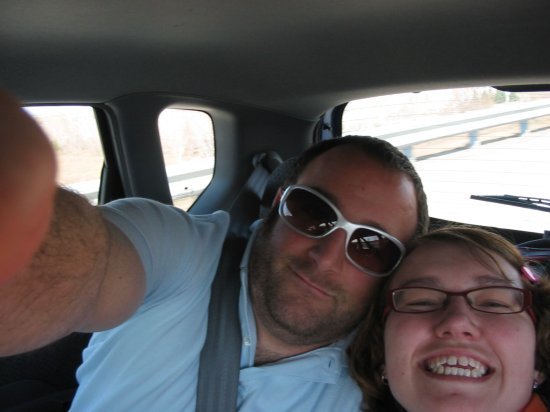 Me and Andrew in the back 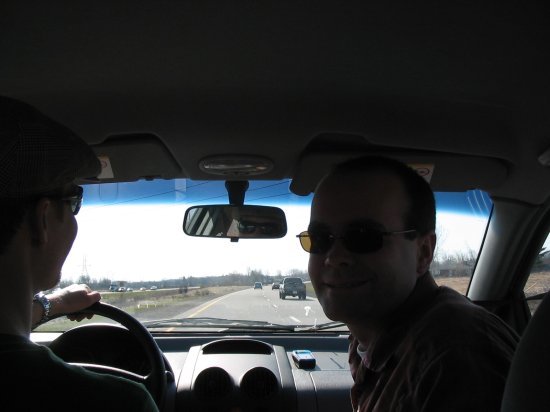 Jan-Mark and Nick in the front 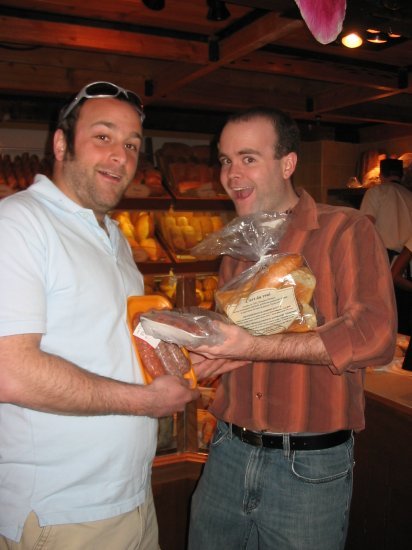 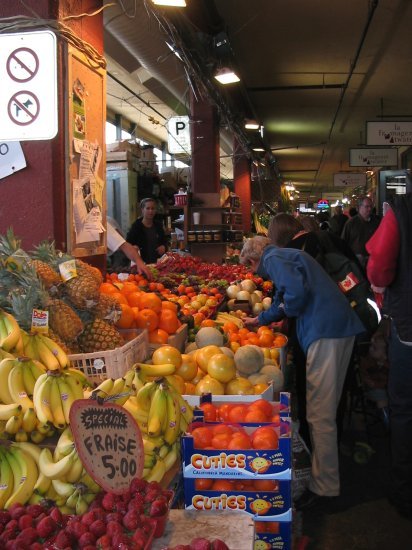 The fruit at Atwater Market 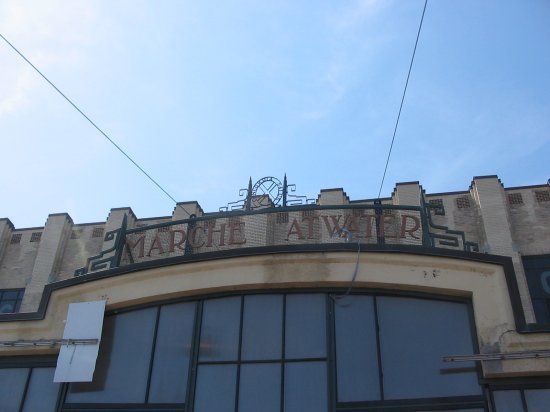 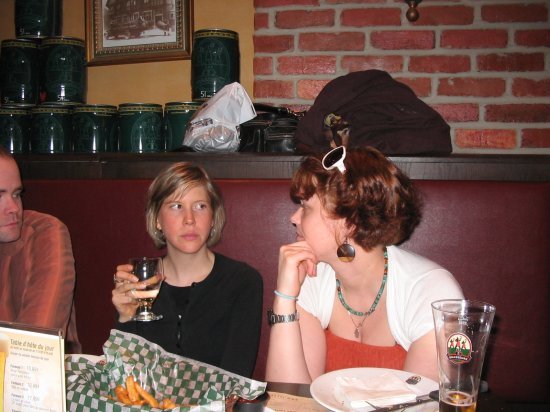 Mandy and Sam at 3 Brasseurs 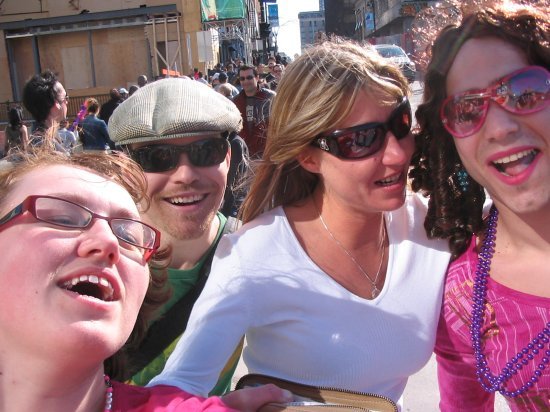 Me, JM and some guy at his bachelor party. 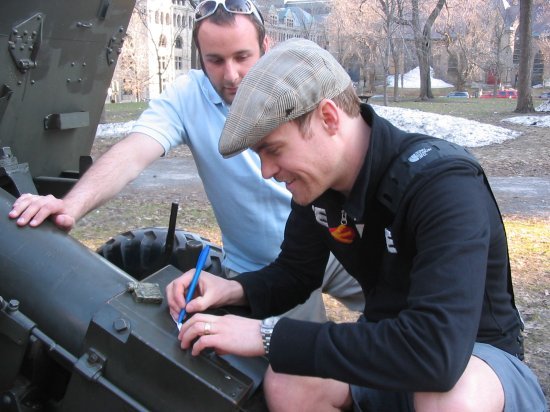 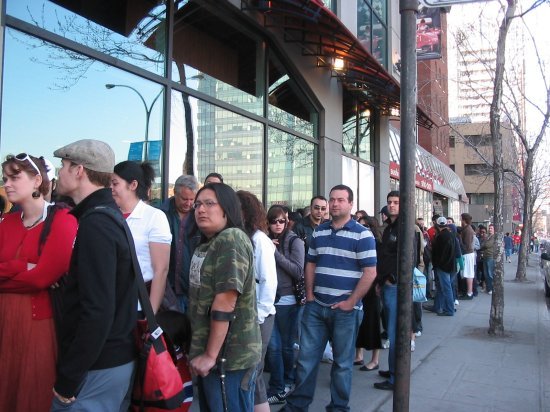 The line at Cage Aux Sports 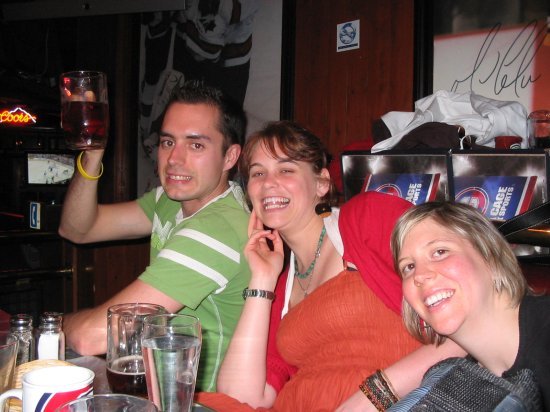 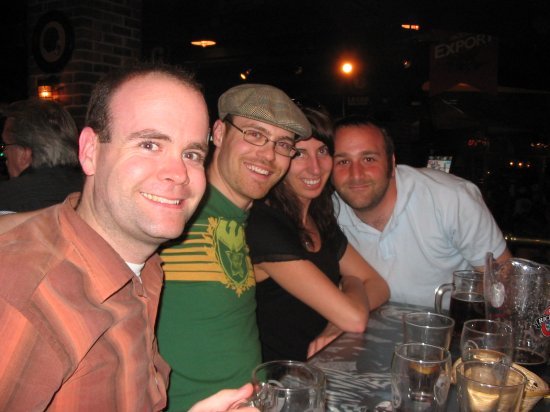 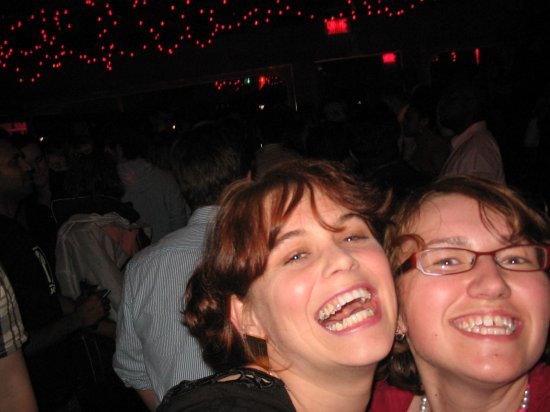 Me and Sam at Tokyo 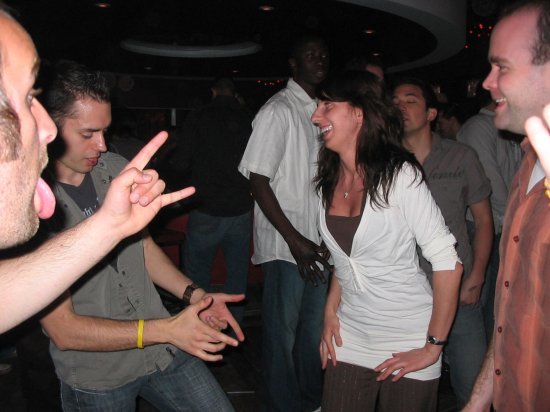 So we walked (slowly) past Leonard Cohen's house to Chez Bagel, where Leonard Cohen has a signed 8x10 glossy on the wall. It was a very good bagel, but it came with very burnt potatoes, and alright scrambled eggs and kind of dry ham. But very friendly/fast service.

Alana went on her way to the hospital and I went back to her house to pass out on the couch again. Martin was there, so I stayed up for a little while with him and a pot of tea. Alana surprisingly came back within two hours and we both went to sleep until it was time for me to go.

At about 5 p.m., I said goodbye, bought a couple of bottles of super juice for the ride home. Then, got a little turned around on the subway, met Abdul and passed out once again in the backseat of his car.

I got home at about 8:30 p.m. and went to the doctor the next day, was prescribed some intense antibiotics, and did not go to work for two days... *sigh*