We left around 11 a.m. and had a picnic in Cobden by the river. It was a little windy and cold and I could feel the rain coming.

Well it rained about 1 hour from home, so by the time I got home I was soakeddddddd. It was kind of bad and dangerous and I probably should have waited it out in Kanata, but I just wanted to go home and sleep!

We hiked in the rain

I left pretty early in the morning and it rained all day on my way to North Bay. Karl met me at some random hotel that I stopped at, because I didn't want to go any further. We went to the quints museum, which I had no idea about, but it was interesting. There were five kids born to the same lady during the Depression and the government took them and put them on display! Crazy.

We got a suite at the University of Nippissing and then took off to find a waterfall. The map they gave us was weird, so it took us a while, and just as we were at the furthest point into the forest, CRASH BAM, the thunderstorm started. So we got out of there as quick as possible, but this was not very fast at all. By the time we were out of the forest, it had stopped raining.

Then we made a pizza in the oven and I fell asleep really really early.

Getting down to lake business

In the morning, I tried to hide my giant bruise from Karen, but she saw it and kind of freaked out. It's OK, it wasn't bleeding so don't worry.

Shylo's other cousin, Eric and I dragged a kayak down to the waterfront and I toured around a little bit. I think I went back up and tried to sleep, but couldn't. It was really early, Shylo's aunt turned the radio on at about 6 a.m. for some reason and nobody slept at all.

Then, we tried to go and see the dune buggy race, but it was over by the time we got there. We took the four wheeler down the road and sat in the back on a trailer. That was kind of crazy.

We took a short hike, where Eric got attacked by a wild turkey and when we got back, I went for some more kayaking.

At some point, there was a very long discussion on who would go into town and buy ice cream and french fries from the famous chip truck. Shylo, Eric and I were going to go, but then a bunch of other people wanted to come and then there were too many to fit in the car, so I volunteered to stay and sleep some more. Which also didn't happen again. 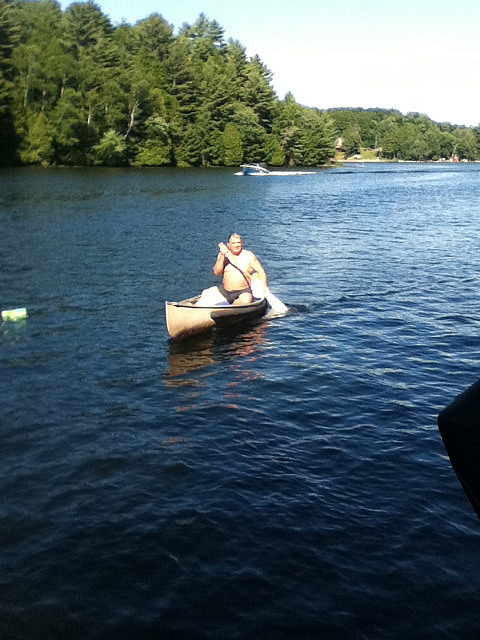 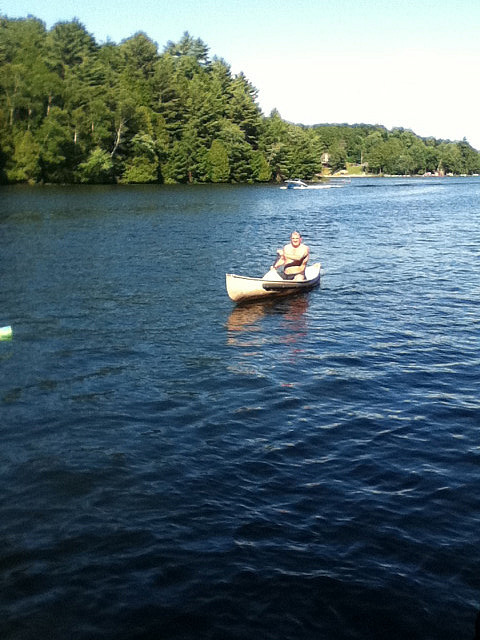 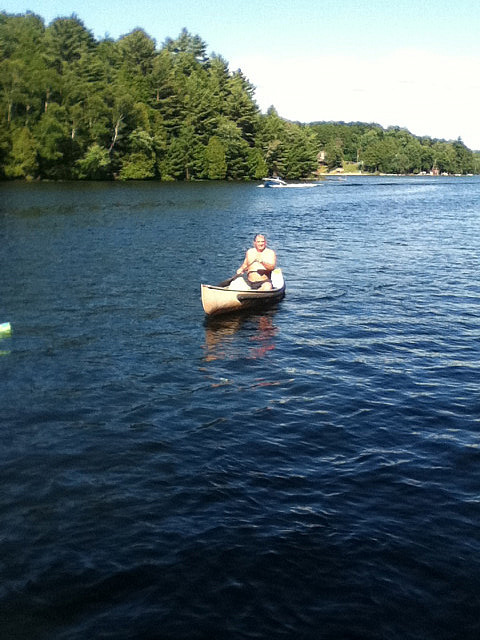 Getting to the cottage

Sooooo I woke up really late and got to Shylo's cottage in the early afternoon.

Their cottage is on a very narrow gravel road that has some pretty steep hills, so I randomly stopped somewhere on the road and gave up. Just as I was getting off the bike and deciding what to do next, Shylo's mom drove up in her big red truck. She told me walking to the cottage would have been pretty far, especially with all my gear and stuff, so she dropped me off.

They had already been there for most of the morning, they woke up at 4 a.m. or something to beat the traffic.

It was great to see Ms. Pruyn once again. Last time I saw her was my last trip to Halifax about three/four years ago!

Everyone else arrived a few hours later, including Shylo's cousin Karen, with her giant dog, Carter. Carter seemed like a nice enough animal, until I went to the outhouse. When I emerged from the bushes, I think I frightened him, and all of a sudden he started attacking me, biting me once, softly, then harder, and then REALLY HARD right below my bum! It hurt really bad and I kind of laughed it off, until a few hours later I actually saw it, a big giant bruise in the shape of a perfect rectangle right at the top of my thigh. Holy schniekies.

Anywho, after that incident, we had a campfire and then I went skinny dipping in the lake late at night. It took me a while to get psyched up. The water was pitch black and the mist on the lake was swirling. I shone the flashlight into the bushes on the other side, convinced something was watching me. Eventually, I counted to three, took a deep breath and jumped in! Ahhhhhhhhhhh awesome.

Karl's car broke down about a week before we were going to go on the trip to Parry Sound to see Shylo's new cottage. It's a good thing, because the whole underneath was rusted completely out, and who knows, maybe we would have fallen right out of the bottom!

Since Karl wasn't going to ride on the back of my moto, I went ahead of him a couple of days early, because I am an underemployed bum.

Shylo and everyone wasn't going to get to the cottage until Friday noon-ish, and my last shift at work was on a Wednesday, so I had a whole day/night to kill somewhere. But where. I use meetways.com to find mid-points in between places, so the Madawaska Valley is right in between Ottawa and Parry Sound. I sent out some CS requests and got one back after like, two minutes from Kent in Combermere and Jen just a few minutes down the road from him. I already agreed to stay at Kent's place, so I had to tell Jen no. However, she offered to make me lunch at her organic farm with her husband and FIVE very blonde/blue eyed children.

That was crazy. The kids were jumping around everywhere, they showed me their chickens and sheep and I ate some sandwiches of HOMEMADE bacon and bread with homemade kimchi. For some reason, I felt the need to turn my motorcycle around all by myself. Their house is on a giant hill, and without thinking, I parked it facing downhill. After I let go, the whole thing fell right on top of me. Smart move Louise. Jen's husband, Tim helped me pick it up and showed me how to park it correctly on a hill. Ha.

From there, I went to Kent's house. He is a PR type person, but he's also kind of a part-time journo when he feels like it. He edits and publishes a yearly charity newspaper for Combermere.

He drove me around town in his Corvette and made me curry dinner. It was great. I had a nice relaxing sleep in his guest room. Not even a couch! Wow!