Today is the day to meet old friends. All four of which I haven't seen in seven years. Craig, I have known since kindergarten, but when he showed up to the Sunset Grill on Bloor St. W, my mom didn't even recognize him! Here he is with his girlfriend, Sarah. Steve is my friend from my silly raver days. It seems that both of us have mellowed out considerably since then. He's married now, but his wife was out of town, so I was disappointed that I didn't get to meet her.

Brendan and Michelle actually started "going out" at my 16th or 17th birthday party in my backyard treehouse! They are still together and still absolutely cute together. The treehouse is long gone now, but nevertheless, they asked my mom and dad to get them a piece of the treehouse for a sentimental keepsake. We came to the conclusion that parts of the ladder are still in tact.

Anyway, breakfast was delish, I had a smoked salmon eggs benedict, but the hash browns definitely were not as "god-like" as others I have had in Montreal.

So, after some catching up with some of my favourite people, my mom and I desperately wanted to go skating at Nathan Phillips Square. We had planned ahead (!!!) and brought our skates. However, mine were really rusty and need a thorough sharpening, so they were sticking a lot at the beginning.

Here I am tripping on the rust:

Here are more photos of me and my mom skating:

My mom also has this sentimental connection to the Christmas displays at The Bay and other stores downtown in Toronto. She used to go with her dad when they lived in High Park in the middle of the night, because that was the only time that no one was around. The displays were nice and everything, but I found it kind of disappointing because of all the subliminal occurances of "Bay coats/blankets" and logos within the displays.

You can't see it in this picture, but it's obvious when you are actually there:

After this, it was about 3 p.m. and therefore, time to go home. Byebye! 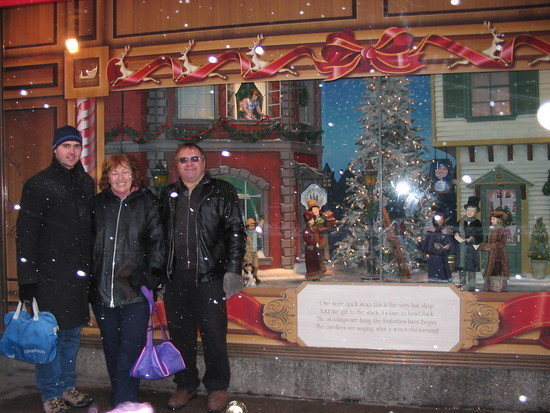 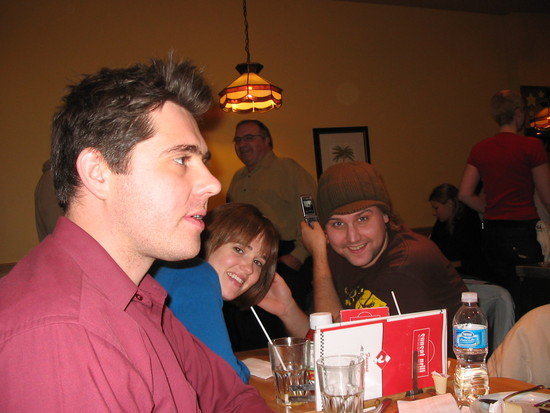 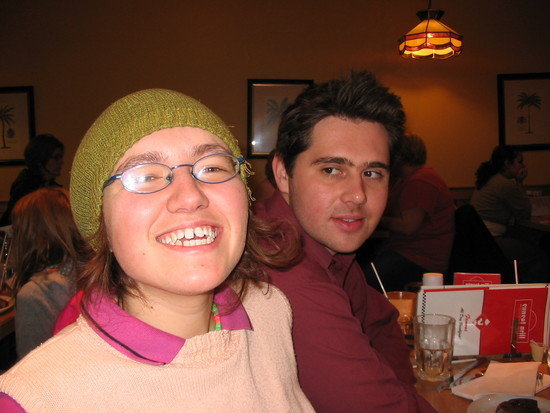 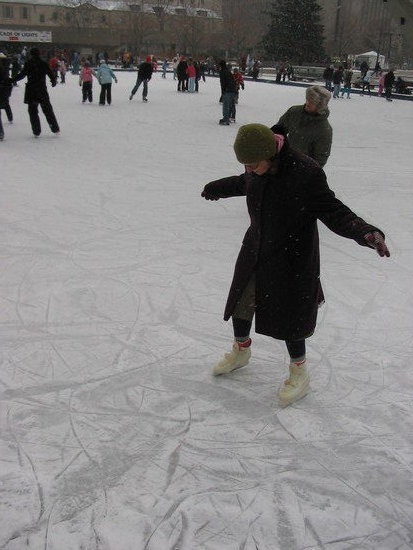 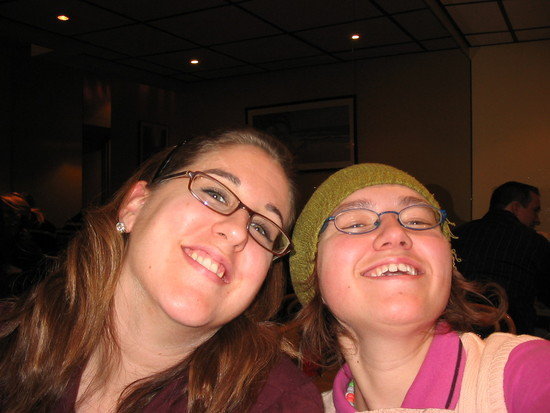 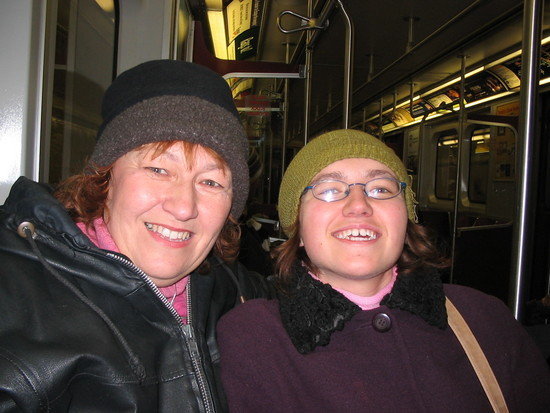 Mom and me on subway 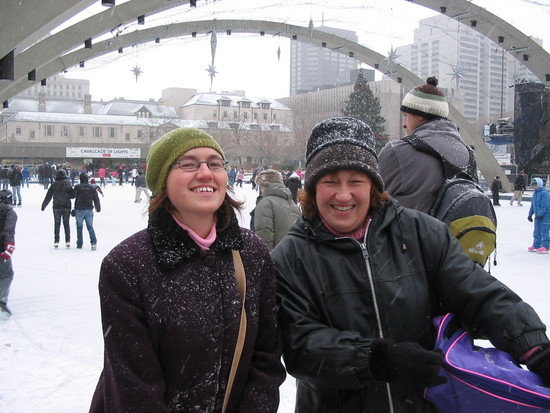 Mom and me skating 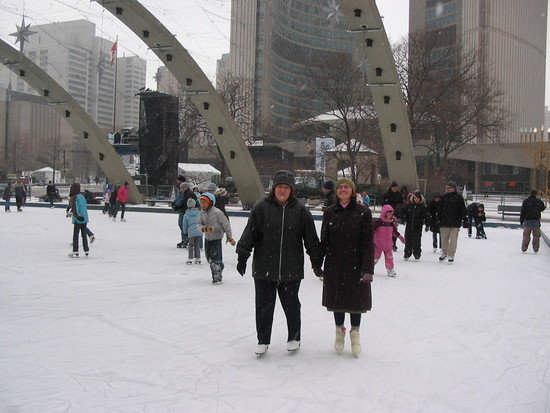 Mom and me skating2 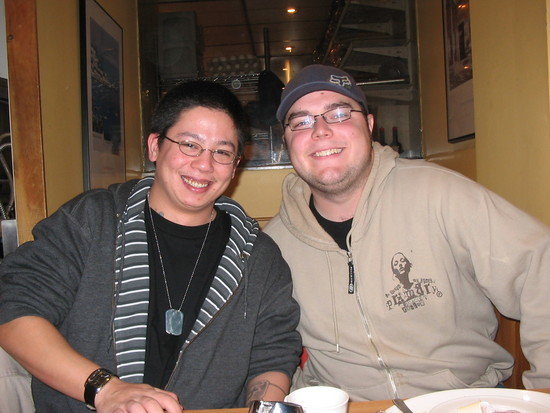 So, now I'm in the hotel lobby after a completely exhausting day of Girl Guide public relations mumbo jumbo. I don't want to say that these types of bureaucratic meetings are pointless, but I have been to quite a few and don't seem to accomplish anything. Today I woke up at 7 a.m. after five hours of sleep. Not happy about that. My roommate woke up way too early and we were even too early for breakfast. Anyway, after a petit dejeuner of croissants and jam, I promptly find what look like worms in my tea. Tea that I already had a cup of and now it is too late. We sit down to brainstorm and come up with new ways to fix a failing and increasingly irrelevant (in the eyes of the majority) organization. This past summer, we had gone through "Transformation". A nice term for downsizing and eliminating bureaucracy on a grand scale. Which is a good thing, on paper. In reality, it involves a lot of change, which is hard for these ladies:

All very nice and helpful women, but I am increasingly growing weary of my responsibilities. Just as I was getting used to doing things the old way, I have to change and learn to do things this radical new way. Previously, Girl Guides was operated on a "top down" basis, the commissioner gave word to the province, the province directed the areas, the areas directed the divisions and the divisions directed the districts. *phew* Now, the commissioner is directing the provinces, the provinces are directing "Communities of Guiding", affectionately called CoGs. Who are the ad wizards who came up with that one? Anyway, yeah, I always did public relations for Ottawa area, but now I am doing "Display tool kits" and "Outreach" for basically CoG #28 and #29. *bow and curtsey* So, I guess that was productive, because before this meeting, I was basically floundering for half a year, not doing anything and taking a break and it was just starting to feel nice. We made some priorities, created some "to do" lists and hopefully we'll be seeing more media coverage of Girl Guides in the future.

And now, I am waiting for Denise to pick me up to go to her Christmas party, details to follow.

So, Denise picked me up at around 7 p.m.

Then we picked up her co-worker Candace

Then we headed off to the Sobey's Christmas party, and got stopped by R.I.D.E. It was a little too early in the night for drinking so we told the cowboy-style cop that we were little angels and he said "That's the best answer you could have". Then we were off to the International Sports Bar & Grill, a typical suburban bar on Cawthra Rd. in the ouskirts of Toronto.

It was interesting to meet all these people that Denise had told me about, and I had some nice conversations with Alison and stuffed my face with calamari:

And here is Candace and a big fat drunk guy:

Denise had to study for her exam tomorrow, so she went home at about 11 ish. She dropped me off at the subway and I headed downtown to meet Chris and Ali.

They weren't there yet so here I am bored and waiting for them on a bench at Ali's place.

Then they got back from Insomnia (some sort of lounge) and I took a really bad picture.

Then it was time for sleeping. 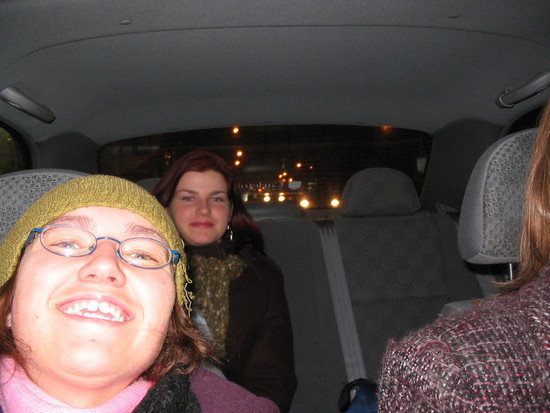 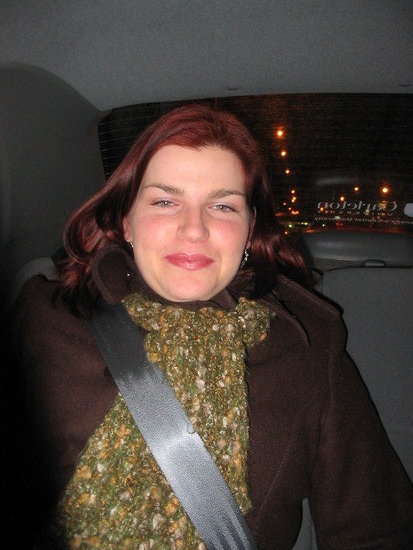 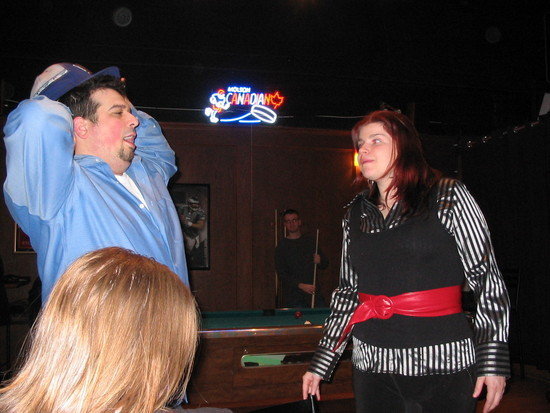 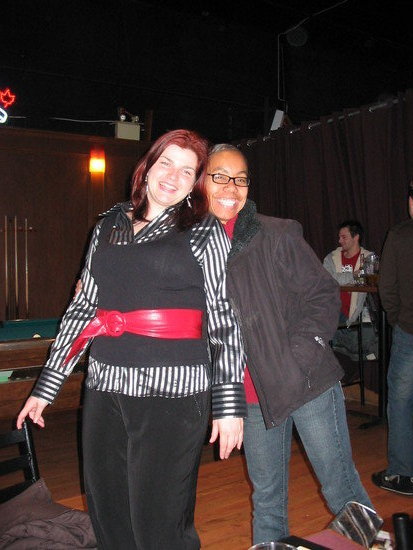 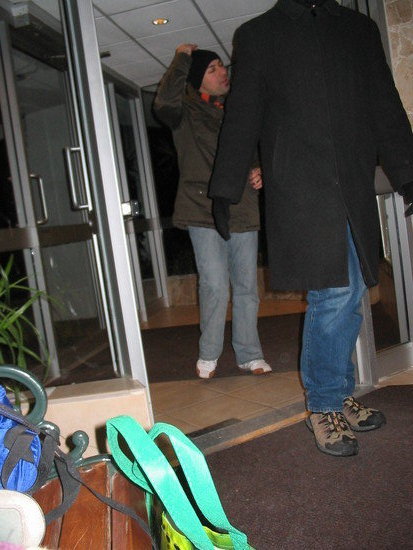 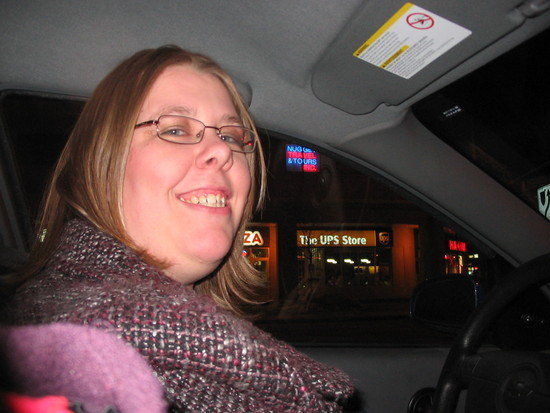 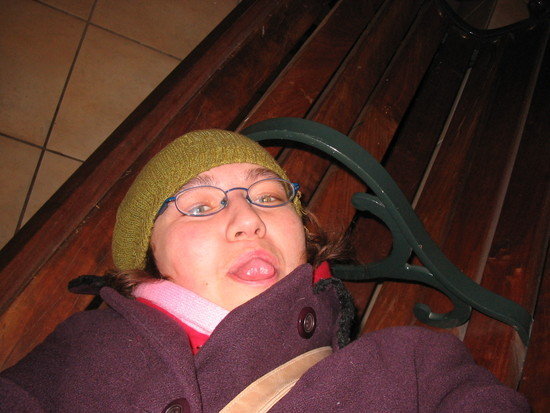 Me on a bench 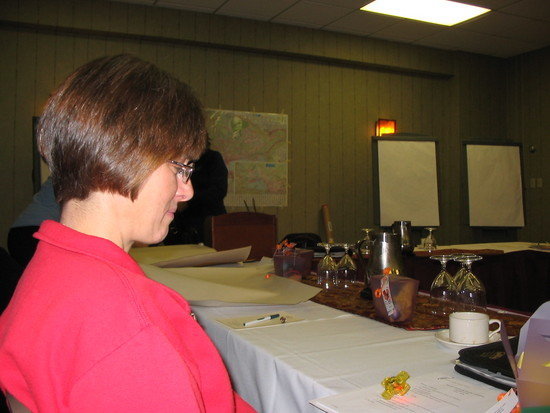 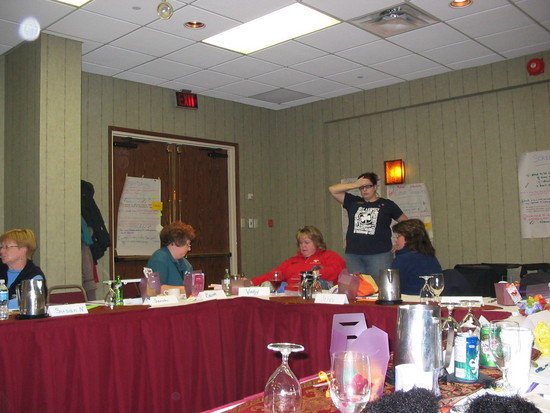 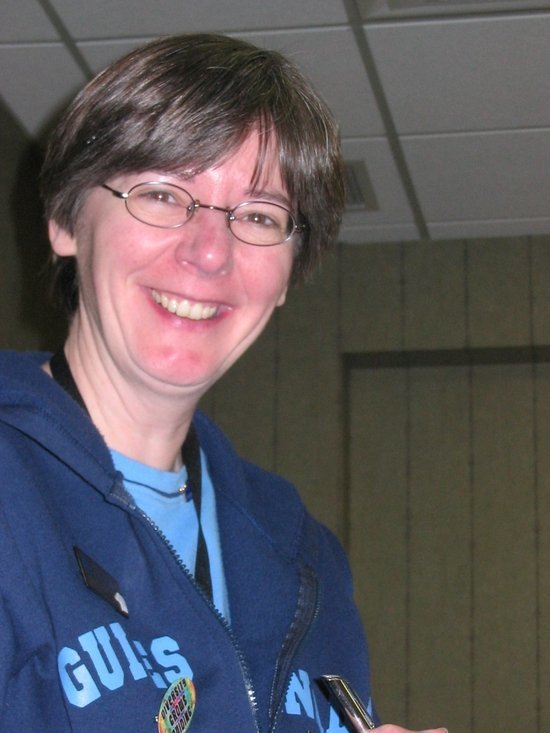 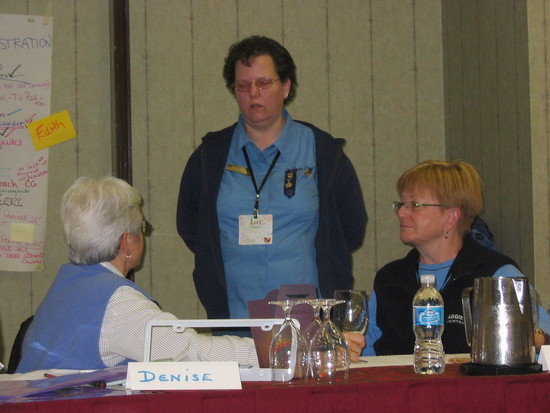 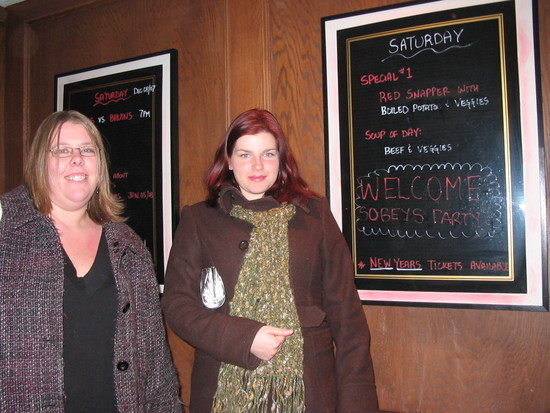 Ottawa to Toronto at night

So, Chris and I left Ottawa at 9:30 at night, this guy was a complete basket case. I met him in Montreal at my very first couch surfing meet up. I thought he was insanely cute, but just assumed he was gay, so I didn't act on any emotions at first.

Later in the weekend, we went to a party and suddenly he gave me a really nice kiss. Then, we kissed the rest of the night, even at the late night poutine place. People told us to get a room.

On this particular weekend, I had asked him to drive me to Toronto. He had been in a deep depression, just spending all day in bed staring up at the ceiling. He agreed, but was afraid he wouldn't be able to do it.

On the night we drove to Toronto, we were talking about the brunch or whatever on Sunday and he was trying to back out of it, using his mental illness as an excuse. I expressed such sentiments, and he slammed on the brakes in the middle of the 401, angry because he said he can never plan anything with anyone and I shouldn't take it personal and he was mad at himself.

I expected to arrive in Toronto at the airport hotel at 2 a.m. ish. I had to be at breakfast at 8:30 a.m., so needless to say I was tired the next day for my super-intense brainstorming session.

Public relations is a strange industry. More on this tomorrow.

Anyway, on the way up, nothing really exciting or crazy happened. Travelling on the highway in the middle of the night was uneventful, except for a few swerving trucks and cars and negligible freezing rain, there was nothing but boredom on the highways of exurban Ottawa and Toronto to report.

We stopped for some drinks at about the middle, who knows where, and the gas station attendant was grumpy and seemed perturbed that I asked so many questions. Sorry for spending 45 dollars on gas and miscellaneous overpriced items, mister.

Anyway, I still don't know if Chris got to his friend's house alright. We are staying on opposite sides of the city, but it seemed like he knew where he was going. I hope they are having fun. 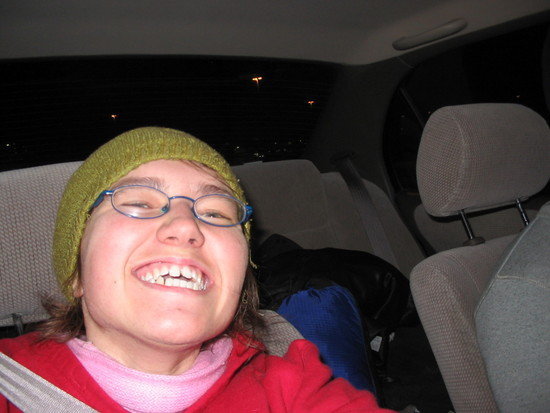 Me in the car