How to open a suitcase with a machete

It was finally time for me to gather all of my worldly belongings. Will, my Cameroonian neighbour in Nanchang had just arrived back to town. I took the slow train there and had a good supply of NyQuil with me, so I survived in a drugged up daze. I had the top of three bunks and a rowdy drunk old man sitting underneath me, so it was not an ideal way to go.

The next day, I arrived on time and Leona was waiting for me at the exact same spot I met her at four years ago, when I lived in Changsha and couch surfed at her house the first time. We took the same old bus back to my old neighbourhood, but she had a new house. It was temporary because she was waiting for her new place to be built. She bought me some crayfish for a snack and I went to bed again, still exhausted.

In the morning, I went straight to Will's place, and all my stuff was still there in the exact same spot I had left it. One problem though, the zipper on my large pink American Tourister suitcase had become hopelessly stuck. Some sort of strange alien-like crystal had formed around the zipper pulls and they wouldn't budge.

I had brought the minimum amount of things with me because I figured I'd get along with all the rest of the things I left in Nanchang for the rest of the week. I wanted to carry as little as possible on the way back to Jilin, because I knew I'd have a heavy load. Leona felt bad for me in my stinky clothes, so she gave me one of her maternity dresses to wear, which resembled a tablecloth once I put it on.

So, there I was at Will's house, desperately yanking at the zipper on my bag, half naked in a black and white checked sheet, screaming for mercy from the heavens to let me at my clothes, just for the love of god, so I didn't have to go home in tattered rags.

We tried dousing the zipper in water, massaging it with oil and lubricating it with soap, nothing worked. Will even got out a huge cleaver and hacked at it for a while. Finally, we gave up and just went to the post office with it, resigned to send it along without even getting out any of the things I would need for the week. However, I knew they'd need to open it because of safety reasons. I was resigned to lugging it back unopened on the train and through the streets of Beijing, in order just to get it back home and open it there.

Just as I was feeling the most dejected, the woman at the post office produced an array of tools and started to work on it. She chiselled away at a bunch of black gunk, wedged under the zipper pull. She took some pliers and we yanked it open with brute force, the three of us together. Will and I instinctively hugged each other in pure jubilation. He had a suspicion that I had glued it shut myself, but now he knew the truth. Some other terrible affliction came over my suitcase, it was no racist suspicion on my part. I got a few things that I would need for the weekend out of it and sent the rest on its merry way, happy to be finished with the whole ordeal.

Will ordered lunch and I changed out of my tablecloth. The last part of my mission in Nanchang was to collect the last two weeks of unpaid wages from my former boss. She has owed them to me since December. I walked over and plopped myself down on her couch. She said she had forgotten all about it and she gave me the cash on the spot. Oh, I'm so glad you were protecting all this money for me for six long months and not thinking about it at all. I said goodbye and she said "See you!" to which I replied, "No, never," and left without another word.

I went back to say goodbye to Will, and shlepped a bag full of unmailable liquids and other things back on the bus to Leona's. I spent the rest of the weekend stress free with her two kids. We probably spent three hours playing with magnetic building shapes and a single rubber bouncy ball. We went to a park and had some Mongolian (Xinjian) food. Finally on Sunday morning, I went home to Jilin on the fast train.

A couple of lakes

On Saturday, I felt a bit better so I went on a very gentle 10km walk around Qingshan Lake. It had been severely polluted in the past, but lately they have cleaned it up and it's now quite pleasant. There are a few parts which are annoyingly full of speeding cars, but most of it was nice to walk around. 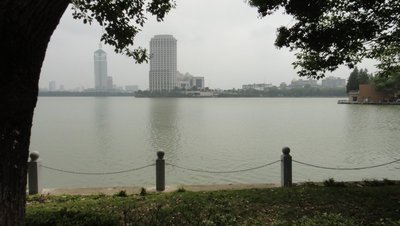 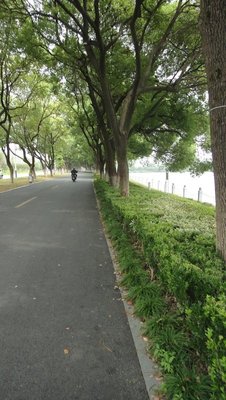 The next day Leona took me out to Xiang Lake where there are tons and tons of lotus flowers. We rented a four person bike and pedalled slowly around the lake. It was insanely hot and I was probably feeling the beginnings of my illness come over me, so I never took any photos. We went to a nearby mall for Hong Kong style lunch in air conditioning. Ha.

The next day I had off was Thursday I think. I went to an obscure "migratory bird sanctuary" at the extreme opposite end of the city. It was more of a zoo than sanctuary, with flightless birds pooping on everything everywhere. The place was filthy. I chased some of the ducks around and then ran away screaming when one of them had the guts to attack me right back. Oh good lord. I ran so fast out of there after that. 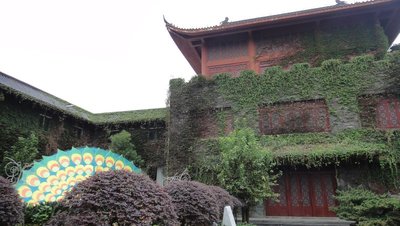 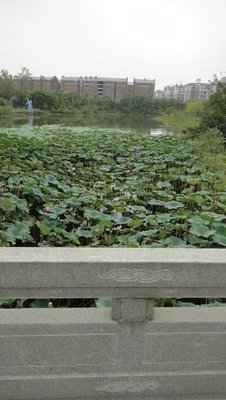 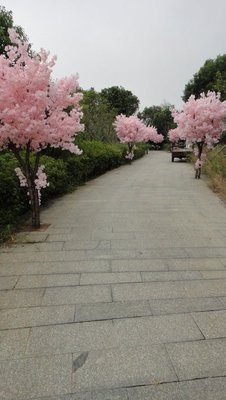 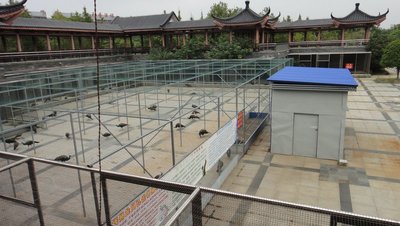 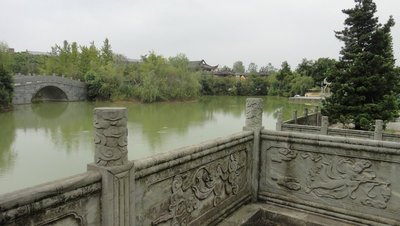 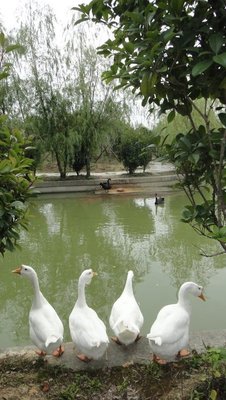 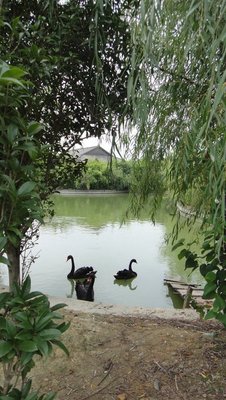 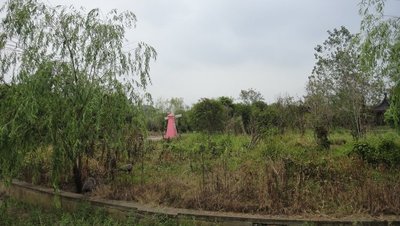 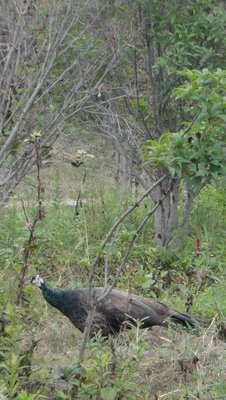 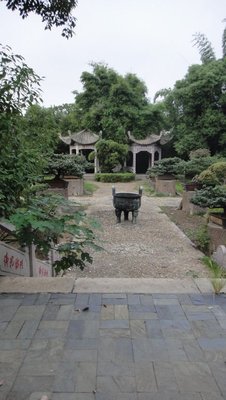 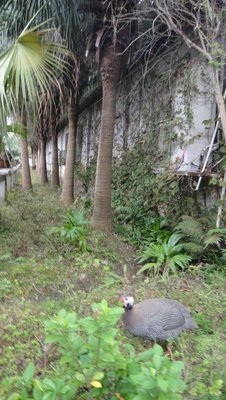 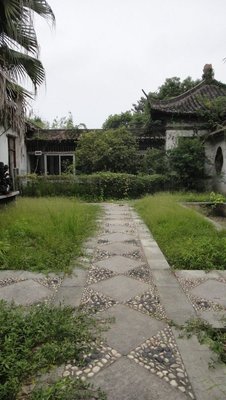 They were setting up for some sort of light festival, probably on account of the upcoming National Week holiday. 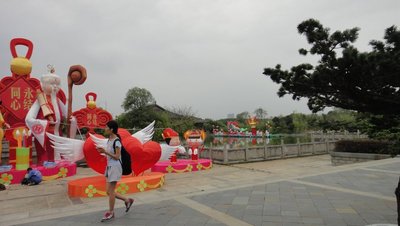 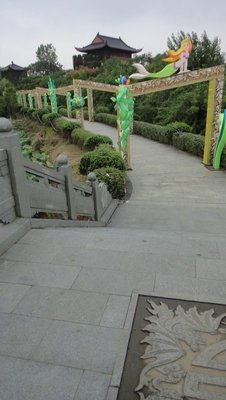 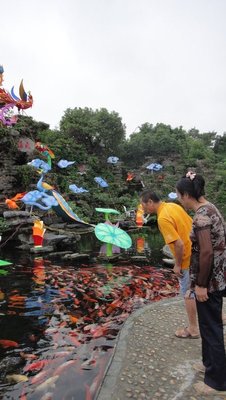 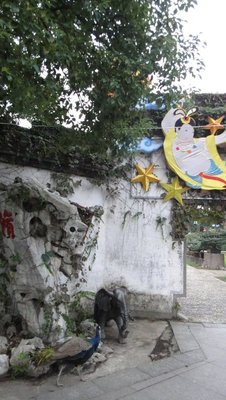 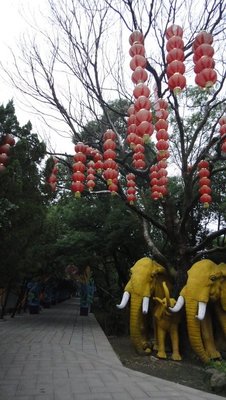 I woke up the next morning feeling dizzy and achy, so I stayed in bed the rest of the week. By the end of the week, I was sure I had overcome whatever it was I had contracted from those horrible creatures.

I quickly found another job in Nanchang, back down in the southern part of China, where it's quite warm most of the year. I packed up my stuff as best as I could and then mailed what I didn't feel like carrying. Three huge boxes filled to the brim. It ended up costing about $30 for that.

I had couchsurfed in Nanchang three years before and made a good friend, Leona, who now has two young sons. She said it was fate that brought us together again. I'm not convinced of that, but it sure was nice to see a familiar face after all the job drama.

The first night after I moved in, she had me over for dinner, and we caught up while trying to pacify her crazy infant. He's very active and completely exhausts his mom every day, unlike her oldest.

On my first weekend in town, I stopped at the revolution museum. Nanchang citizens are proud that they were the first to overthrow the Kuomintang government during the cultural revolution on August 1, 1927. There was a brand new museum, complete with hologram soldiers, telling the story of the fight in Chinese only of course.

Visitors could climb up the mountain, just like the soldiers did, when they retreated into the countryside after the Kuomintang took the city back on Aug. 5. 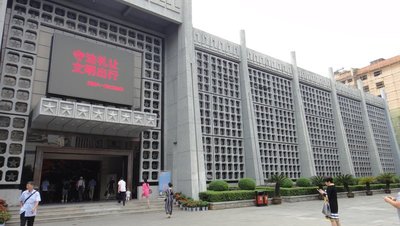 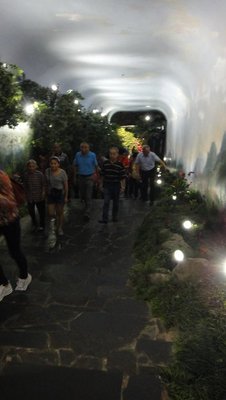 The headquarters of the People's Liberation Army was established in a posh hotel, which is now pristinely restored, and thousands of people visit every day. 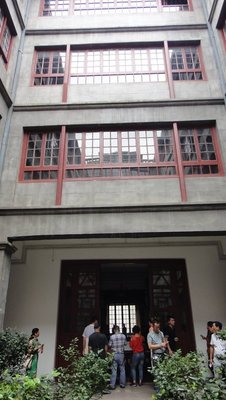 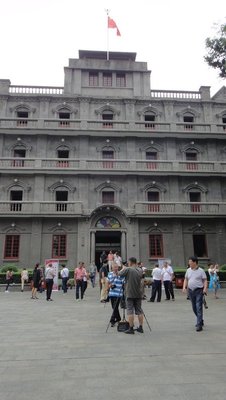